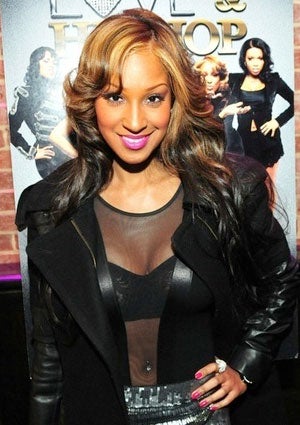 There are a lot of words that come to mind when you think of hip hop… unfortunately, love isn’t usually one of them. Olivia, R&B singer and star of VH1’s new reality series “Love & Hip Hop,” knows that first hand.

The New York native was dropped from 50 Cent’s G-Unit Records almost four years ago, but is now ready to prove that she’s more than just “the pretty girl in G-Unit.” Hopefully, all the hissing among the ladies won’t drown out her voice. Olivia spoke with ESSENCE.com about “Love and Hip Hop,” 50-Cent, and working on her new album.

Olivia spoke with ESSENCE.com about “Love and Hip Hop,” 50-Cent, and working on her new album.

ESSENCE.com: “Love & Hip Hop” seems to be more than just a show about rappers and their significant others. What’s your role?
OLIVIA: I definitely showcase my talent, that’s why I’m on the show. The show is about love and hip hop. Four women finding themselves, finding their own. Chrissy and Emily dealing with their situations, with their relationships. My part is about music and my role as a single person on the show. You see me at showcases, in the studio, working with my manager. You see me in a lot of different elements.

ESSENCE.com: Do we see more of who you are as a person or just as an artist?
OLIVIA: That’s definitely why I did the show, so people could see my personality. Mona Scott, the producer of the show who has been with me since Violator {Management}, approached me to do the show. And that’s why I did it. A lot of people don’t really know my personality and this show was a good way for them to see. I felt like everyone just saw me as the pretty girl in G-Unit. No one really knew who I was.

ESSENCE.com: 50 basically claims that you became more of a liability to the label. You insist that G-Unit didn’t know what to do with an R&B artist. Was the split from G-Unit really a combination of both?
OLIVIA: No. 50 and I recently sat and spoke and he knows the issues we had. It was definitely because there wasn’t an R&B presence at the label and he was conducting me as a rap artist.

ESSENCE.com: Tell us about your new album?
OLIVIA: It’s called “Show the World.” I purposely didn’t put any features on it because I wanted it to be all Olivia. I felt like every time you saw me I was with another artist. But I have great producers like Missy Elliott, Brian Michael Cox, Tony Dofat, Mario Winans, Ryan Leslie and Sean Kingston. The list goes on. I’m very excited about this project. I’m glad that I did everything over. And I wrote close to 95% of it.

ESSENCE.com: What’s the biggest lesson the music business has taught you so far?
OLIVIA: To be resilient. And to keep at it. There’s a lot of politics in the industry that people don’t know about. They just see the people that are on TV and think it’s just that easy. But it’s a lot of hard work and if you’re not disciplined or don’t know what you’re doing or have a good camp, it can all come to pieces. So I’m grateful that I have great people around me.