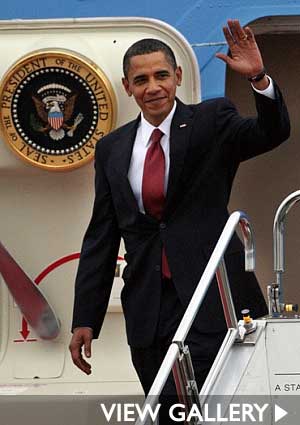 President Obama left Washington yesterday for a nine-day trip to Asia–a part of the world to which, as a Hawaii native, he has strong ties. In a pre-trip interview with Japan’s NHK broadcasting network, he described having “fond memories” of traveling around the Pacific region on the way to Indonesia, where he also lived, with his mother and stepfather.
The President’s trip began in Tokyo, Japan, where he met today with Prime Minister Hatoyama to discuss Japan’s role in the international effort in Afghanistan and stopping the spread of nuclear weapons in North Korea. From Japan, he will move on to Singapore, then China, stopping in Shanghai and Beijing, and concluding his trip in Seoul, South Korea.
In addition to looking at nonproliferation, President Obama will also discuss economic issues while in the Pacific region. China, in particular, is one of the fastest growing economies in the world, and one with which we have a strong trade relationship. Since many U.S. jobs are tied to our exports with Asia, expanding jobs at home will likely be a key area of conversation.
“The overarching theme is that America is a Pacific nation,” said Ben Rhodes, Deputy National Security Advisor for Strategic Communications, in a briefing before the President’s departure. “It understands the importance of Asia in the 21st century, and it’s going to be very engaged in a very comprehensive way to make progress on a whole series of issues that are critical for our prosperity and our security.”