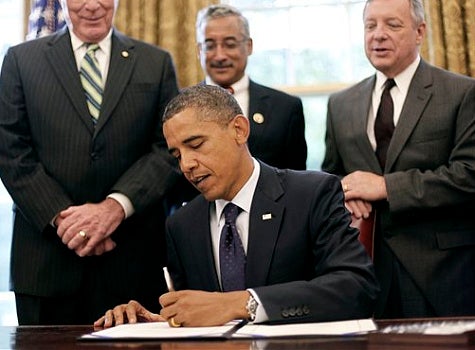 The sentencing difference between powder and crack cocaine is widely recognized as one of the government’s most racially unequal laws. Possessing five grams of crack will get you a mandatory prison sentence of five years, while it takes 500 grams of powder (the form of cocaine more prevalent among the wealthy) to receive the same penalty. This 100-to-1 disparity partly explains why African-Americans disproportionately fill our nation’s jails, yet for 24 years the policy has remained on the books — until now… Last week Congress passed a bill to narrow the powder-crack sentencing ratio to 18-to-1, and today President Obama signed it into law. Virginia Congressman Bobby Scott (pictured standing behind the President, with glasses), who led the effort in the House of Representatives, talked to ESSENCE.com about what the new law means for the criminal justice system, how the current rule “makes no sense,” and why the fight around this issue is far from over. ESSENCE.com: Why is changing this law such a big deal? CONGRESSMAN BOBBY SCOTT: I don’t know anybody who thinks the present law is fair. Crack is the only drug where possession only can get you mandatory jail time. About 80 percent of the people convicted of crack offenses are Black, and only about 20 percent of those convicted for powder are Black. A kingpin dealing in powder gets a lesser offense than the guy on the street who deals it when it’s converted to crack. And there is no pharmacological difference between the two. It makes no sense at all. ESSENCE.com: What’s your response for people who say the bill doesn’t go far enough, and that we shouldn’t accept an 18-to-1 disparity? SCOTT: They’re absolutely right. There should be no differential at all, and no mandatory minimums, but the progress is a step in the right direction. They’re advocates, and we’re legislators. As legislators the choice we had was to either get 18-to-1 now, or keep it at 100-to-1. We decided to take 18-to-1 now, and then continue to fight to equalize it at 1-to-1 and eliminate the mandatory minimums. This bill is better than what we’ve got, but there is no suggestion that we’re satisfied with this as a final result. ESSENCE.com: On the other hand, some critics argue that the penalty should remain just as harsh because crack has caused so much damage in Black communities. Were there discussions about instead raising the punishment for powder to match? SCOTT: If it’s a bad policy to begin with, you don’t make powder worse. Most of the experts will tell you that the criminal justice system has virtually no impact on drug use. The only place you hear the rhetoric of higher penalties deterring drug use is in political debates. You don’t see any research in favor of longer penalties for drugs. Rather than giving a five-year mandatory minimum to a person with a weekend’s worth of crack — spending $150,000 to $250,000 of taxpayers’ money — we could use that money to fund rehabilitation and prevention programs to keep people off drugs to begin with. ESSENCE.com: Looking at the history of the current law, harsher penalties for crack were actually supported by Black lawmakers concerned about the impact of the 1980s crack epidemic. At what point did they start thinking it was a mistake? SCOTT: Charlie Rangel was one of the leaders in the legislation, and when it came by the committee the sentencing difference was 20-to-1. By the time they finished debating it on the floor it was 100-to-1. You can go back through the history, but I don’t think there’s any constructive purpose to try to assign fault for what happened 30 years ago. Whatever the motivation was to begin with, what we know now is that the disparity is absurd. It does not reduce crime, and it is discriminatory. ESSENCE.com: With all these insights, why has it stayed on the books for so long? SCOTT: The problem with crime policy is that people are so busy being so-called “tough on crime” and trying to find slogans and sound bites, most do not want to vote to reduce any penalty. In talking to people who have been around in Congress a long time, no one can remember a single mandatory minimum being repealed or even reduced. So this is a major victory, but we don’t want to celebrate because we still have a significant disparity and the mandatory minimum. We made it clear during the negotiations that after this bill we will continue to fight.