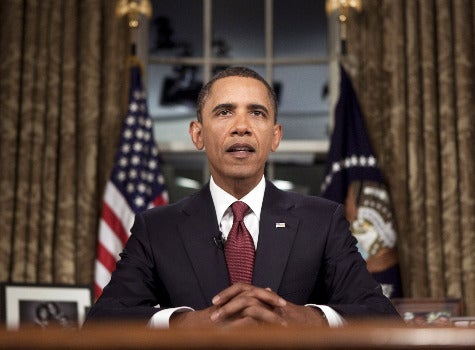 It happened two weeks ago, but President Barack Obama made it official in an Oval Office address on Tuesday night: after seven and a half years, combat operations in Iraq have ended. Although 50,000 non-combat troops and contractors will remain on the ground until the end of next year to train and advise Iraqi security forces, all U.S. combat brigades — more than 100,00 troops — have been sent home.   “Operation Iraqi Freedom is over, and the Iraqi people now have lead responsibility for the security of their country,” the President said in his remarks. “Even as Iraq continues to suffer terrorist attacks, security incidents have been near the lowest on record since the war began. And Iraqi forces have taken the fight to al Qaeda, removing much of its leadership in Iraqi-led operations.”   Speaking in a somber, low-key tone, President Obama avoided giving a splashy victory lap speech, or even using the phrase “Mission Accomplished,” as he acknowledged that security challenges in the region remain. He instead focused on the idea of “turning the page” — both in Iraq, and here in the United States, where the war has been a deeply contentious issue. It has been the source of countless protests over the past seven years, and among African-Americans, nearly half of us were against the war before it even started.   Obama also addressed his deployment of additional troops in Afghanistan, where he says they must fight to break the Taliban’s momentum. He vowed that it is also an operation with an end in sight. “Next August, we will begin a transition to Afghan responsibility,” he said. “The pace of our troop reductions will be determined by conditions on the ground, and our support for Afghanistan will endure. But make no mistake: this transition will begin — because open-ended war serves neither our interests nor the Afghan people’s.”   The response to developments in Iraq over the past couple of weeks has been relatively muted, given that the war has been such a controversial issue for seven years. You’d think it would be a bigger deal, but many progressive activists are wary about the 50,000 non-combat troops remaining on the ground until 2011, which the President says are necessary to strengthen Iraqi troops and support its people. But I give the President credit for keeping his campaign promise to end combat operations, on his set deadline, and moving the situation in Iraq to a point where we actually are turning a corner. For more of Cynthia Gordy‘s Obama Watch stories, click here.