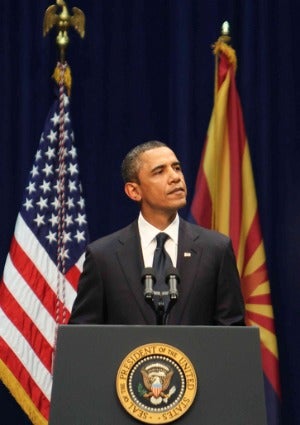 Remember a couple of months ago, after the Democrats’ midterm election “shellacking,” when folks declared it “the end of Obama?” Turns out the President is making a comeback.  …

According to an ABC News/Washington Post poll, President Obama’s approval ratings have spiked recently, with 54 percent of Americans commending his job performance. This marks a five-point rise from December, and an eight-point jump above his all-time ratings low in September.

What’s behind the sudden turnaround? For starters, Americans overwhelmingly approved the President’s handling of the January shootings in Tucson, with 78 percent favoring his reassuring message of unity and national healing alone. Even 71 percent of Republicans, according to the ABC News poll, gave him credit for a job well done.

Another factor is the string of bills that Obama signed during the “lame duck session” — that brief period of time, following the November midterm elections, in which the outgoing majority Party pushes through as much outstanding business as possible. During this past lame duck session, Obama squeezed in a repeal of “Don’t Ask, Don’t Tell,” a law providing health care for 9/11 first responders, and an extension of Bush-era tax cuts for all Americans (a move that was unpopular among his progressive base, yet ultimately netted tax relief for the middle class, and benefits for the unemployed).

The President also appears to have a shot at keeping the positive momentum going. As House Republicans gear up this week to vote on a repeal of the health care reform law, my guess is the move will backfire. After all, exit polls showed that the GOP won the House last fall because of frustration over the economy — not because people want to revisit the time-consuming health care debate. If Obama stays laser-focused on economic recovery, which is sure to be at the heart of his State of the Union address next week, he may go on to trounce his opponents even more.

But what’s for certain, as the latest polls indicate: Politics is an unpredictable business, and it’s far too premature to ring the death knell on Obama’s political future.