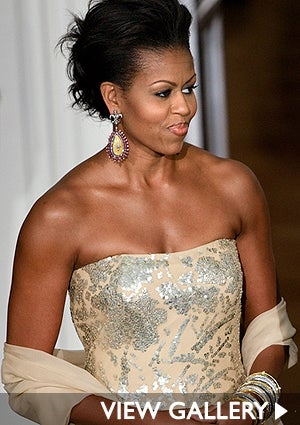 “Nude” is the new black for summer 2010. According to fashion magazines that cater to mostly White women and several top designers who sent this hue down their spring/summer runways on pale-skinned models, nude is the “it” shade. But what does this mean for women of color whose complexions are obviously not light enough to execute this rosy appearance? Apparently, Black women don’t factor into this trend. While beige may be “nude” for most White women, “nude” for me would be brown. This isn’t the first time this loaded word has been used in the pages of glossies, but it is the first time that the fashion world’s hidden racism have been exposed on such a large scale and caused many to finally take a closer look at the ingrained language of fashion. We’ve got Michelle Obama to thank for this. Ever since she stepped into the role of First Lady, her fashion choices have caused quite a stir. While it’s certain that the beautifully intricate dress she wore to the president’s State Dinner to honor the Indian Prime Minister would have everyone talking, little did she know that the Naeem Khan dress would reveal what most of us Black women have always known: fashion’s racial bias. The fact that people are still buzzing about this topic months after the State Dinner is proof that this conversation is long overdue. It was the designer’s description of the dress that ignited the recent debate over fashion’s inclusion of woman of color. Naeem Khan explained that his dress was “sterling-silver sequin, abstract floral, nude strapless gown.” “Nude” is an appropriate color descriptor when the wearer’s clothing is indistinguishable from their actual skin. Perhaps such a description wouldn’t have caused eyebrows to raise if the woman wearing the dress were White. But we’re talking about Michelle Obama here and that dress was far from “nude” against the First Lady’s beautiful ebony complexion. When reporting on the dress, the Associated Press first called it “flesh colored.” They later switched the description to “champagne” after an editor rightfully questioned, “Whose flesh? Not hers [Michelle Obama’s].” Our exclusion from the fashion world doesn’t only apply to the number of women of color on the runway or in fashion editorials, the language of fashion has also been used in shutting us out, especially when it comes to this offensive word. Look up “nude” in the dictionary and it reads: Matching the skin color of a White person (yes, that’s the 2010 edition). It’s obvious who designers are catering to when they use this word to describe this shade, even if in this case the designer is Indian (not sure the dress would appear “flesh-colored” on most Indian women, either). I know I’m not alone in the search for Band-Aids (ditto for pantyhose and bras) that blend into your skin. It’s a futile hunt. On Michelle Obama, “nude” is an actual color, not a neutral. What about calling it beige, champagne or peach? The fashion industry should follow Crayola crayons’ lead and put to rest words like “flesh” and “nude.” Back in 1962, Crayola got rid of the color “flesh” (the light-colored crayon many of us can recall was also called “skin-colored”) and replaced it with “peach” during the height of the Civil Rights Movement.  While our community faces a heap of issues more pressing than this one, I think it’s great that this topic gained mainstream attention with many, Black and White, calling for the word to die. It’s just such a limiting word. Come to think of it, I’ve never even seen a White woman the color of Michelle Obama’s dress. Have you? Seriously, the word is just so incorrect on all levels. In any event, Michelle Obama looked goooorgeous in her Naeem Khan champagne (that’s what I’m calling it!) dress. One of the reasons we look so good in light colors like beige and champagne is due to the contrast it creates against our skin, and not the illusion of nakedness the word “nude” implies. Besides, I highly doubt “nude” was the look our respected First Lady, or most women who aren’t pop stars, was going for anyways.