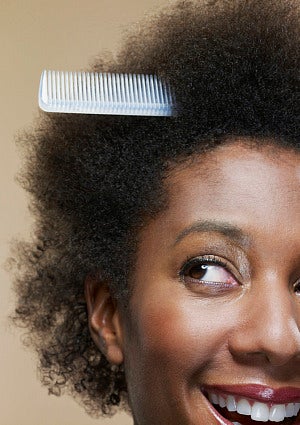 “To touch–or not to touch” a Black woman’s hair without asking is the question being asked by journalist and NPR guest host Allison Keyes. As far as she’s concerned the answer is almost always a resounding “No.” In an opinion piece called “Keep Your Hand’s Off” Keyes goes in on the practice of strangers putting their hands on a Black woman’s hair, without asking. “I think it is a race issue–as well as a personal space issue,” she says comparing the practice to walking up to a pregnant woman and touching her belly. The race element, however, “a bit tricky:

“I was walking one day recently, [afro] puff held high, when a White woman walked up and just grabbed it–cooing, “Oh that’s so cute!” Fighting back my impulse to grab her wrist, I simply stepped back and growled, “Don’t touch my hair!” She reared back, offended, “Well, I don’t see what the big deal is!” That response is exactly the problem. In what realm of reality is it OK to walk up to a person and–without her permission–lay your hands on her body?”

To keep the peace, Keyes goes on to suggest that everyone keep their hands to themselves. “That way, no one’s fingers will be injured.” What’s your take? What do you do when people touch your hair without asking? Read More: