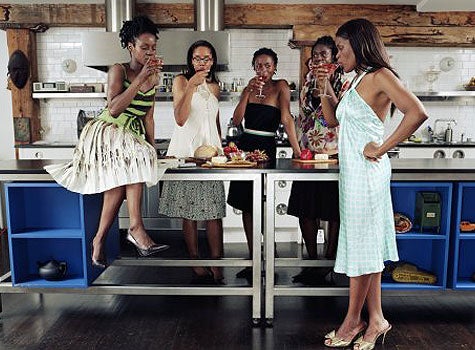 If we had a dollar for every time we heard we heard a woman say, “I don’t get along well with other girls,” we’d probably be vacationing somewhere exotic and exclusive right now instead of writing this story. It’s true. We can be downright nasty to other ladies. Want proof? Look no further than ‘The Real Housewives of Atlanta.’ The name-calling, back-stabbing and physical confrontations are excellent, however amplified, examples of how we tear each other down. And while NeNe and Kim’s blow-up has been reduced to a simmer, we can expect the Housewives’ ego jabs to continue in the next season.

If you’re finding it difficult to warm up to other women, here are ten helpful tips for making friends with other chicks.

Brush Your Shoulders Off: Analytical creatures by nature, women can overthink the way people interact with us. If you convince yourself that someone doesn’t like you, you’ll be on the defense and won’t be yourself. And if you don’t open up, you’ll never develop deep relationships.
Be Nice First: When you enter a situation with a potential for catty-ness, kill it quickly with a  smile or compliment. Women tend to react to each other based on their own insecurities. If you sense this in another girl, compliment her haircut or encourage her to do well in her endeavors. The wall she’s built up will come crumbling down.
Don’t Hate: We tend to automatically assume other women are rude or crazy or sleazy, just because they’re different from what we’re used to. Women can sense when they’re being summed up, so challenge yourself to not judge other people. If you treat them with respect, you may gain a new friend with a fresh perspective
Share Her Load: That cranky co-worker, classmate or fellow church sister could just be T.O.’ed because she’s got too much on her plate. A lot of women are working and taking care of the kids all on their own these days and that’s a lot of pressure. When you get a minute, offer a helping hand. She’s likely to return the favor once her load is lighter.
Give Her Some Space: Even you and your best friend need some tme to breathe. Our tolerance for each other tends to drop when stress levels are high. When you see your girlfriend after a little break, you’ll have more to bond over.
Be Her Sugar Mama: The saying, “You can’t buy your friends,” is not entirely true, especially when that friend has a sweet tooth. Bring back a chocolate chip cookie for a co-worker when you’re out on a coffee run. She probably won’t stop stealing your stapler when you’re gone to the bathroom, but she might start bringing it back when she’s done with it. Plus you could see a slight change in her mood since chocolate makes us girls feel good.
Get Tipsy: We’re not advocating drunkenness, but a girl’s night cocktail can help you unwind and open up a little bit. Alcohol binds to the neurotransmitter seratonin which makes us feel more loving. You could end up hugging it out by the end of the night.
Get Boy Crazy: Like it or not, women talk about men a lot. Open up about an experience or issue that you and your boyfriend or husband had. Because women often feel the need to talk through our differences more than men do, sometimes it’s better to discuss your relationship with a girlfriend than with your man. Having a healthy dish session could improve your mood too.
So Opinionated: Asking another woman her opinion lets her know right off the bat that you value what she thinks. Get her advice on things that she’s knowledgeable about. If she’s into fashion, ask her what to wear at to your company’s holiday party.
Don’t Be Jaded: Just because females have wronged you in the past, don’t write off the whole gender. The fact is, men don’t bond the same way that women do, so while it might be easier to make male friends, you could be missing out on deeper relationships