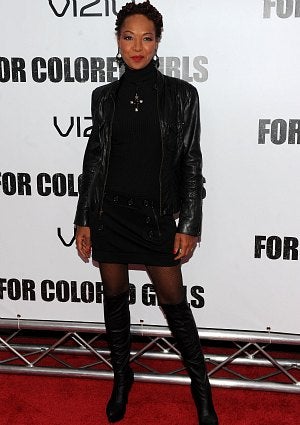 By all accounts Tyler Perry’s “For Colored Girls” is one of the most anticipated films of the year. The soundtrack, which debuts today, features a haunting version of the Nina Simone classic “Four Women,” sung by her daughter Simone, together with Ledisi and Laura Izibor. ESSENCE.com recently caught up with Simone to talk about her legendary mom, her thoughts on the film and other projects she has in the works ESSENCE.com: What was it like to remake one of your mother’s classics for this movie? SIMONE: Well, I [previously] did a CD of my mother’s classics to pay homage to her. So it’s always a joy to sing songs that I’ve lived with all my life. And to have this particular song chosen for such a project is a compliment. I’m really happy to be a part of it. ESSENCE.com: Did you ever make a connection between the song “Four Women” and “For Colored Girls” before this point? SIMONE: Not really. But I think that “Four Women”…. You know, mommy wrote it to capture the backgrounds of four different characters who were trying to make their way in a world that made it extremely difficult to be a Black woman. My understanding is that this particular movie is all about that. So I think the two are a perfect match. ESSENCE.com: When your mom wrote the song, it was a different era. Do you think that over the years stereotypes regarding Black women have eased up a bit or not so much? SIMONE: Well, when my mother wrote the song, you didn’t hear the term “bitches and ho’s” so much in reference to our women. So I think that the times have changed regarding the terms that are used. [But] a lot of the issues that were taking place when my mom was active are still taking place today. As the saying goes, the more things change, the more they stay the same. ESSENCE.com: Besides you mom, who are some of the singers that have influenced you over the years? SIMONE: I was raised in the late ’60s and 70s. You had Otis Redding and the Ohio Players and Rufus. And that’s just R&B. Then we go to church and there’s James Cleveland and the choirs he was in. I love Barbra Streisand. I also love the Doobie Brothers and Kansas and Chicago. ESSENCE.com: So you’re also a classic rock girl! SIMONE: Yes, I am! I like to think that my taste in music is pretty extensive and not just limited to one genre.  ESSENCE.com: Besides “For Colored Girls” what other projects are you working on? SIMONE: There are a few things that I have in the pot right now that aren’t finished cooking — but I am definitely anticipating a great meal! One of those things is called Nina’s Kids. It’s gonna be made up of children – a few choirs, actually. We hope to be launching that here in Miami sometime in December. I’m also working on my second CD. You know, [I honored] the past and gave my mother a bow, if you will. Now I’m looking forward to coming out with my own sound and my own message. The “For Colored Girls” soundtrack hits stores today.