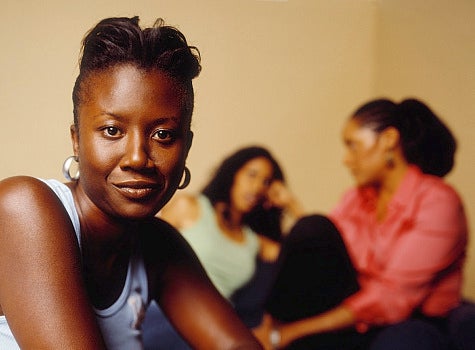 Confession: For several weeks now, I’ve been living in fear. It started when I learned “Nightline” was headed back to Atlanta for a “Face-Off” debate with the title, “Why Can’t A Successful Black Woman Find A Man?” Sigh. Again? Before I even knew the line-up (Steve Harvey, Sherri Shepherd, Jacque Reid, Hill Harper, Jimi Izreal) or the questions (though as ESSENCE’s Relationships Editor, I guessed most of them), all I could think about was the aftermath of a show they did about the same topic back in December. What ensued was a sort of Single Black Woman hysteria, an expected reaction when it’s repeatedly implied that checking “single” on an application of any kind after 30 means you have somehow failed in life, and that your prospects of finding a great guy to love and love you back are pretty slim. I knew it would be best for me to self-medicate to avoid the PTSD that was to come (Sangria or ice cream? Which has less calories?) Surprisingly didn’t feel I needed either as I watched the roundtable in its entirety online. It’s possible this topic has been so over-covered that I’m numb. But actually? The segment wasn’t as bad as I was expecting. (Jimi Izreal though?) I guess when you bring men and women to a roundtable to discuss relationships–as ESSENCE did in its May issue, currently on stands–you cut through a lot of the outlandish speculation and have a real progressive discussion. All forthcoming conversations about the state of heterosexual relationships should implement this policy as it’s never made sense to me why same sex groups are expected to address a dual sex concerns. The panel, moderated by Nightline’s Vicki Mabrey, covered the usual fair–interracial dating, Black men with Peter Pan syndrome, and the Obamas. But throughout, the lack of communication between the sexes bothered me. It seemed no matter how many times Sherri and Jacque reiterated what Black women want in a man, a guy with a steady job, who is secure with himself, who can provide a friendship, and partnership, and maybe help them take out their cornrows from time to time, the male half of the panel didn’t seem to get it. Instead of listening to the ladies, Izreal told them what they wanted (as if): a Denzel prototype. Steve told the women the simple things they wanted weren’t possible (you want a man to help take out your cornrows? Not in his DNA.) If five good and grown Black adults who all work in some fashion in the field of communication–and every man on the panel has a book on relationships–can’t make sense of what the opposite sex wants, I wondered what hope does that leave for the rest of us? Something else that struck me was the underlying negativity of some of the responses. Was I the only one who noticed the weak overwhelmingly female audience response when Jacque said she believed good Black men existed? Anyway, when Hill offered the idea of dating a good man, even if he’s a blue collar guy (it’s not the only solution, but it’s a decent one.) Sherri shot it down with a long laugh. At another juncture, Steve stated a man, at all times, needs to feel like a man. The women took that statement to its most extreme conclusion that a man expects her to spend her waking hours validating his position, which women aren’t (understandably) willing to do. I didn’t think at all that was what Steve was implying she do, moreso like, “hey, try not to emasculate your man.” It’s was another practical idea that could help us go a long way in re-building Black families, but like other useful suggestions, there seemed to be a mental block, well, blocking them from catching on. I took away some useful male insight from the panelists–I am the potential link to a man’s success, men may be more ashamed of their lack of success than “intimidated” by a woman’s accomplishments, and men aren’t trying to see me taking out my hair. But ultimately, what I re-learned was the biggest obstacle to building healthy relationships might be an inability to catch on to the fundamentals like communication and hope. I know it will take more than just that to get us down the aisle and over the broom, but we’ve got to get a command of the basics if we ever expect to to go from RSVPing for weddings to planning them. Oh, and in case you were wondering: I went with the sangria. For more Demetria Lucas stories, click here.   Demetria Lucas is the Relationship Editor at ESSENCE Magazine and the author of the upcoming dating advice guide A Belle in Brooklyn (Atria). Follow her on Twitter at @abelleinbk Related stories: