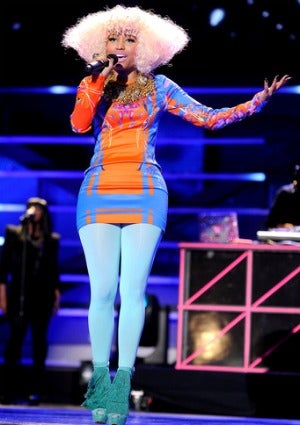 Nicki Minaj is known for many things — wacky outfits, outlandish lyrics and even her beef with Lil’ Kim, but a gay alter ego? The reigning female rapper had a lot to say about Roman Zolanski, her latest creation. When asked if Roman would show up during a New York Times T Magazine interview, in classic Nicki Minaj form, she put on an English accent and said, “Sometimes if it’s really early in the morning, Roman gets cranky and doesn’t want to get out of bed. Roman is lazy, you know, he wants to stay out all night and not wake up so I send Nicki into the world. Roman has to be conjured up and now you’ve conjured him.” According to Nicki Minaj, Roman is a sister and even helps out with her image. “Roman is leading the way when it comes to makeup and hair. He’s gay,” she said. However, it’s questionable if Roman is making good fashion choices for Nicki. These days you never know what you’re going to get when you see her. She definitely keeps up guessing. Is it safe to say that Nicki Minaj’s many alter egos play in her favor or are they too much to handle?