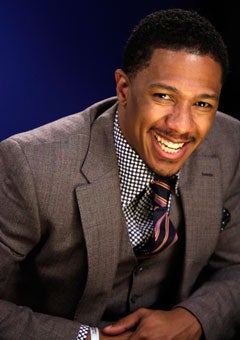 Nick Cannon does the most, but in a good way. This Sunday the media mogul, barely over the age of 30, will add standup comedian to his long and illustrious resume. His comedy special, “Mr. Showbiz,” airs this Saturday on Showtime at 9 pm ET, and proves Cannon isn’t new to the game.

Cannon chops it up with ESSENCE.com and discusses how he got back to his comedic roots, what went on inside the hospital during the birth of his newborns, and his quest for world domination…

ESSENCE.COM: People don’t know you started in this comedy business when you were 15. Was this your ultimate career goal? It feels like it’s coming out of nowhere…
NICK CANNON: I was on stage when I was 11 years old, by the time I was 15 I was a professional travelling comic. I love it, so to actually do a standup special, it’s like I’ve been doing this for the last 20 years, and finally it’s a dream come true. The proof is in the pudding. The one thing to my benefit is the people in the comedy world who know standup know that is where I started, so hopefully [others] will be presently surprised. You’ll see that this isn’t something that I’m trying to do — this is what I do.

ESSENCE.COM: More details about the special?
CANNON: It’s two hours long, but cut for TV to be about an hour. You’ll be able to get more content on the DVD later. But the special is mostly about my life, and people getting to hear my opinion and who I am. My humor is really self-deprecating, I don’t take anything to seriously, I make a lot of jokes about myself. I was on the road for over a year, talking and putting the act together. It’s the real deal. It’s not something I just conjured up — this is me at my best.

ESSENCE.COM: Do you try out your material on Mariah and does she think you’re funny?
CANNON: My wife is the first person I try my jokes out on. She has the craziest sense of humor in the world. She always tells me what I should add to my jokes, telling me I should do this or talk about that. Yes… she’s a good co-writer.

ESSENCE.COM: Ha, who knew?  What’s been the funniest thing about fatherhood?
CANNON: Everything. From my wife’s birth being a production (laughs), making sure the music, the lighting, the cameras were just right, all the way to me already being overprotective of my daughter, and trying to turn my son into a player. He’s a ladies man already — that’s why I named him Moroccan.

ESSENCE.COM: Do you ever reflect on how life has changed for you?
CANNON:  Back in my “Wildin’ Out” days, all I was thinking about was chicks and jokes. Right now I’m in place where I can help others succeed and accomplish their goals. Fatherhood now is definitely a priority in my life, I want to be the best father I can possibly be, and that is in the forefront of everything.

So that means I have to be the best provider I can be, and go ten times as hard in my grind and my plan for world denomination. My company is called “Incredible,” so I’m expecting to do incredible things. Three movies, my musical artists, my own music career, my stand-up career, my radio show, and the TV shows that I’m producing are flourishing. I’m very excited about the opportunities God has given me thus far.

“Mr. Showbiz,” airs this Saturday on Showtime at 9 pm ET.