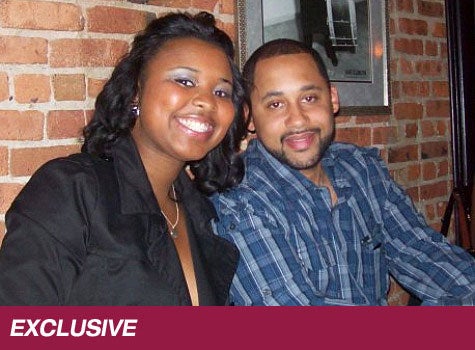 About 1,500 friends, family members, and mourners of both Nia Haqq and Michael Muchioki, the New Jersey couple killed after their engagement party last weekend, filled the Newark Symphony Hall today to celebrate her life. View exclusive pictures of Nia Haqq and Michael Muchioki. To celebrate Haqq’s favorite color, her best friend since the third grade, Shakira Farrior, sent text and Facebook messages to all attendees requesting that they wear purple. Many of Haqq’s friends wore purple flowers in their hair, while many of the young men wore lavender dress shirts or ties. “Her first name means ‘purpose’ and her two middle names, Ayana and Laila, mean ‘beautiful flower,'” said Farrior, who wore a purple silk blouse, light purple fingernails and a big flower in her hair. The funeral was a traditional Muslim service, or a Janaazah Salaah. The auditorium was completely silent throughout the duration of the ceremony. A whisper or a simple cough seemed amplified. The Imam Aleem Razzaqq, dressed in typical Muslim ceremonial attire, switched back and forth from Arabic to English. He started out the ceremony by saying in Arabic, “Peace be upon all of you and God’s mercy.” He then translated it into English. Nia’s wooden casket was adorned with gold handles and placed in the middle of the stage. A gold, light blue and black prayer rug covered the casket. Pink and green wreaths lined the surrounding area. A poster of baby pictures of Haqq and recent photos of the couple sat on a stand. A large portrait of Haqq, smiling, commanded the most attention. When the Iman called for all the male Muslims to come to the stage, approximately 30 men approached the casket. Next, the women formed two lines to pray, as is the tradition. Nia and Michael, whose funeral will be held tomorrow, will be buried side by side. Nia is survived by her mother Majeeda Haqq, grandparents, uncles, aunts and a host of cousins. A family friend, David Daniels, who has acted as a father figure to Haqq since she was a toddler said, “She was there for me a few years ago when my best friend died, now she is gone.” He pulled off his sunglasses and wiped the tears from his eyes. “She was a wonderful person, I mean look at all these people who are here for her.” After the service, her mother said, “When I was out picking a dress for this, I saw a mother with her daughter, and I cried. But, for those short 25 years of Nia’s life, she lived. She traveled, she went to Paris, Switzerland, Germany and the islands. She always did something. She was my homie, I was a young mother and we had a very open relationship. We talked freely. There was never a time where she could not come to speak to me, no passing judgment. We would talk and I would advise her. Yeah, she was a mommy’s girl.” Read more: