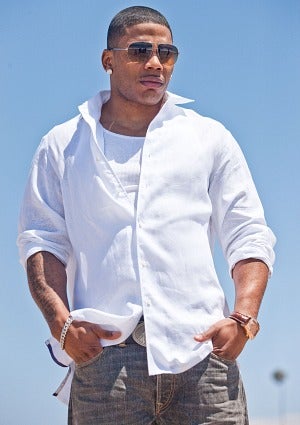 It’s been 10 years since Nelly hit the scene with “Country Grammar,” now St. Louis’ finest is back with his fifth album, “Nelly 5.0.” With the single “Just a Dream” reaching the top of the pop charts, Nelly proves he still knows how to make hit records. There are guest appearances by T.I., Chris Brown, and Kelly Rowland — with whom he picks up where 2002’s “Dilemma” left off. “5.0.” is one heck of a career comeback. Nelly recently spoke with ESSENCE.com about “5.0,” his mega-hit “Just a Dream” — and how he’s working to make his Apple Bottoms fashion line into a lifestyle. ESSENCE.com: It’s been 10 years since you first hit the scene. And it’s also been a few years since your last album, what can we expect from “Nelly 5.0?” NELLY: Growth is a part of the equation. These past couple of albums were done when I had some life-changing events happen. My sister died in 2005 and six months later I lost my grandfather. A couple of months ago I lost my cousin and two months after that I lost my other grandfather. Coming to this point, these are lessons that only life can teach you. No one can prepare you for that. I named this album “Nelly 5.0” because it’s my fifth drop date. If you know anything about 5.0’s and Mustangs, you know how classic a Mustang is, you know the tradition of it, you know what it stands for. It’s about muscles, it’s about energy. ESSENCE.com: What kind of collaborations do you have on this album? NELLY: I got a few. I reunited with Kelly Rowland. We did this joint called “Gone.” It’s more or less a continuation of “Dilemma.” It finishes the story off and shows that we’re still interested in each other. I did a track with T-Pain and Akon, and I also collaborated with Chris Brown and Plies on a track called “Long Gone,” and also one with the girls from Dirty Money.  ESSENCE.com: Fill us in on your hit single, “Just a Dream.” NELLY: I’m a huge fan of strings, and I love beats. I tend to gravitate to those, but it doesn’t always work because I’m a hip-hop artist, but when it does work, it transcends. When I heard the beat I wanted to do something that people could relate to, so what better topic than relationships? To love, to lose, to want to love again, that transcends all boundaries. “Just a Dream” is just that. ESSENCE.com: Apple Bottoms is a household name now, how are you trying to take the brand to another level? NELLY: Fortunately, we’ve had the opportunity to expand in licensing. We now have bedding and optical wear. We’ve had accessories for a minute now; purses, handbags, jewelry, shoes. But now we want to be your Apple Bottom lifestyle. We want to decorate you, your house, your furniture, everything! ESSENCE.com: How did you get started in business? NELLY: It was a long-ass journey. I met up with someone I met in Cancun when I was down there vacationing and selling t-shirts. When I got home, he wound up meeting my manager and coming to St. Louis and said he could put us in touch with Mase. One of Mase’s managers got a hold of my CD. We then flew to Jersey and recorded some music. I was taking my demos out to all of the record labels. All of my demo songs were “Country Grammar,” “E.I.,” and “Ride with Me” and “Batter Up,” which all turned out to be my singles. Sometimes I would get dirty looks, other times people were counting the time until I got the hell up out of there. Finally I got to Universal and it worked out. “Nelly 5.0” is in stores today. What’s your favorite Nelly song?