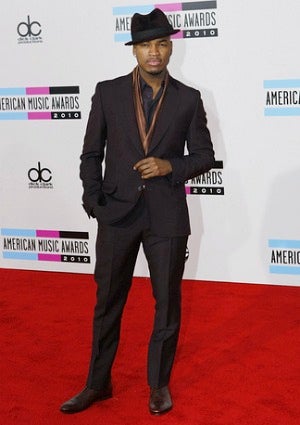 In the last few weeks, those of us living on beer budgets have picked up our spirits grooving to Ne-Yo’s celebratory single, “Champagne Life.” This week the Grammy-nominated singer/songwriter/producer is out with his fourth album, “Libra Scale.” Unbeknownst to many is that “Libra” was initially written as a movie, but when Ne-Yo couldn’t execute the idea he turned it into a theatrical musical project. The final result is a Michael Jackson-inspired album that he refers to as an “ensemble piece.” ESSENCE.COM spoke with the proud new dad about his baby girl, born November 13, and three reasons why we should all pick up a copy of “Libra Scale.” ESSENCE.com: How is “Libra Scale,” different than your previous three albums? NE-YO: This album is more than just the music. From the visuals to the way it all came together, this album is more of an experience — an audio movie. Everything is tied together to tell the story of the Libra Scale. This is an ensemble piece, an experiment, more of a concept album based on fiction and fantasy than any of my other albums. ESSENCE.com: Explain this experimental concept… NE-YO: Through my love of sci-fi film, Japanese animation, and comic books, I turned what it is to be a celebrity into a super power. The story follows three main characters’ quest for money, power, and fame. That quest leads them to a man named Numinus who gives the money, power, and fame, but under the condition they protect the city at all times. Under no circumstances are they to ever reveal where they got the powers they posses, or be allowed to fall in love. As time progresses they realize even though it was fun for the moment, that life really wasn’t all that it was cracked up to be. The main character meets someone he falls in love with, and it forced to choose [between the lifestyle or the girl]. ESSENCE.com: Playing off the words Libra Scale, what songs do your album the most justice? NE-YO: One song that stands out me, for very different reasons that have nothing to do with the story, but my personal life is definitely “One in a Million.” With the birth of my daughter the song takes on a whole new meaning. Lil’ Ms. Madeline Grace has become that one girl that makes me feel like no one has, and she stands out above and anything and everything else. ESSENCE.com: How sweet, as a new father what about your life do you see changing the most? NE-YO:; I plan on using the little free time I get more wisely. I can’t be as much of workaholic now that I have the responsibility to get home so this little girl can have a father. I refuse to be a Skype dad. When it’s possible for me to go home I’m going home, to make sure my daughter knows her father. ESSENCE.com: Besides obviously love, did you feel anything instantly Madeline was born? NE-YO: I’ve never seen what doctors and nurses do when a baby is born but there is a lot that goes into it. From the outside looking in, it looks like they are being really rough with the baby. From everything they are sticking in the nose and their mouth to get fluids out, my defense mechanism clicked on instantly. Out of no where, I’m like ‘What the hell is going on?” I never felt so protective it kind of threw me a little bit. “Libra Scale” is now available on iTunes.