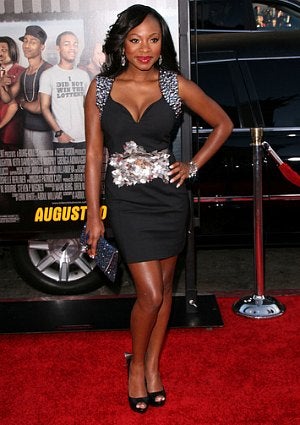 We first met Naturi Naughton in 2000 as a part of the pop trio 3LW, now the New Jersey native has matured into a triple threat. As a Broadway, film and television actress, Naturi sang her heart out as Inez in “Hairspray,” made us rock as Lil’ Kim in the Biggie biopic “Notorious” and recently filmed a guest appearance on AMC’s “Mad Men.” This Friday, she opens as Stacie in the comedy “Lottery Ticket” with co-stars Bow Wow and Ice Cube. ESSENCE.com chatted with Naturi about being true to herself, disagreeing with Lil’ Kim and when to say “I told you so.” ESSENCE.com: Tell us about your “Lottery Ticket” character, Stacie. NATURI NAUGHTON: Stacie is Bow Wow’s character Kevin’s best friend and supportive and down-to-earth. She’s the girl that’s going to be with him with or without the money. She’s such a ride-or-die chick, I loved playing her. ESSENCE.com: How was working with Bow Wow? NAUGHTON: It was really fun! Working with Bow is like having a brother on set. He’s very giving and he comes on ready to have a good time. ESSENCE.com: Do you two make a love connection in the film? NAUGHTON: We do and I’m really excited for people to see it. It’s a nice scene, good chemistry and there’s an actual love scene. You definitely see that great moment where it goes from friendship to love interest. ESSENCE.com: Don’t lie, are you taller than Bow Wow? NAUGHTON: No! I’m only 5 feet, so I’m a shortie and you know I had to be extremely short to play Lil’ Kim. ESSENCE.com: Regarding “Notorious,” how’d you receive Lil’ Kim’s criticism that your depiction of her wasn’t accurate? NAUGHTON: I was excited to play Lil’ Kim and I wanted to do the role justice. I worked really hard on that role, whether it was performing the rhymes, studying the dialect, her swagger and her stage performances. I wanted people to see my range and stretch my wings as an actress. Being Lil’ Kim gave me the opportunity to step outside of Naturi and show people that I can pull this off. Hopefully, she enjoyed and is a fan of it now. I’d love to talk to her. ESSENCE.com: We were shocked to see you topless, though we understood it was par for the course in playing Kim. How did your family react? NAUGHTON: Oh goodness, it was nerve-wracking when I first saw the movie. I told my family I’m portraying a real-life person, I’m an actress who just dove into the role. I was willing to go into the rawness of Biggie and Kim’s relationship. I definitely explored a whole different side of myself, that was not Naturi. It was just something that I wanted to do as an actress. ESSENCE.com: We’ve heard you’re going to appear on AMC’s critically acclaimed drama “Mad Men,” which has only had three Black characters so far. What can you tell us about your role? NAUGHTON: I just finished shooting the episode, it’s the tenth episode of this season and it airs in September. I’m really excited that I got a chance to work with this amazing show. I can’t tell you much because it’s super hush, but I’m a Black character and I got a chance to do something totally different and no one has ever seen me do before. ESSENCE.com: You mentioned 3LW earlier, how did the group affect you since many said bandmates Adrienne Bailon and Kiely Williams ousted you because of your complexion? NAUGHTON: There was so much drama with that group from my look to who they wanted to sing, but I’m not mad at the 3LW drama because it made me who I am. ESSENCE.com: We heard Kiely, who recently released that suggestive “Spectacular” video, threw a hot plate full of KFC food at you back then? What in the entire…  NAUGHTON: Lord, that is the oldest story but yes, it’s true. So much happened back then… ESSENCE.com: With your current success, do you want to scream ‘I told you so’? NAUGHTON: No. I don’t know what Keily’s doing but I wish her the best. I just hope people remember how influential they can be on young girls, especially young black girls. What we do is what we inspire younger people to do after us so I just try to remember that in everything I do. ESSENCE.com: Are you especially careful with the roles you play as an actress? NAUGHTON: I try to be, but as an actress it’s a little different. There are roles where you may have to be a killer, a bad girl or something really sexy. But I really value my influence because if we don’t take responsibility, no one else will and that’s important to me. ESSENCE.com: As for music, are you planning to record again? NAUGHTON: I’m definitely planning on a solo album at the top of the year, just trying to get the right team together. Right now, I’m so busy promoting the film, but when I can focus I’m definitely going hard. I think my style is a mix between R&B and pop. I’m a true singer who grew up singing in church, so I love singing my heart out. I’ll definitely have a couple of ballads, so people really get to hear the texture of my voice and really enjoy good soulful music. ESSENCE.com: What else do you have on the pipeline? NAUGHTON: I did a film with Danny Glover and Kimberly Elise called “Highland Park” that’s scheduled to come out early in 2011. It’s about Detroit and growing up in that impoverished neighborhood of the same name. It’s also about the lottery and teachers who gamble after they’ve been laid off. A lot of my movies have the lottery in them, from “Highland Park” to “Lottery Ticket,” it’s so weird! “Lottery Ticket” premieres nationwide today.