Linda Spradley Dunn answers the phone sounding cheerful and relaxed while vacationing on Martha’s Vineyard, the picturesque New England haven where the elite summer by the sea. After a whirlwind period of inking new deals and expanding globally, the entrepreneur spends part of August with family and friends in Oak Bluffs, the island’s affluent African-American enclave, where one may spot the Obamas, Spike Lee or Gayle King.

Despite a packed social calendar (“There are four parties a day,” she says, chuckling), Dunn takes time to explore the African-American Heritage Trail of Martha’s Vineyard. According to Elaine Weintraub of the Trail, enslaved Negroes lived in the maritime colony as far back as the 1700’s. “Folks can’t lose sight of the tremendous history here,” Dunn says. “Black people—doctors, lawyers and domestics—formed a community of their own. It’s a place for us to fellowship. There’s a legacy.”

Building and leaving a legacy is important to the fifty-something wife, mother and CEO of Odyssey Media, a world-class marketing and communications company that aims to connect and empower women of color in America and beyond. Headquartered in South Florida, with satellite offices in Hackensack, New Jersey, and now Charlotte, North Carolina, Odyssey has a 25-member team, most of whom are Black women. Together they execute the brand’s upscale business retreats and conferences, boot camps, networking events, digital forums, travel adventures and philanthropic endeavors.

The visionary behind it all is a savvy, charismatic and confident southern “gurl” whose career has spanned nearly four decades. Long before “boss up” and “lean in” entered the lexicon of professional women, she was grinding. “I am a natural-born leader,” Dunn says. “I find it hard to follow rules and established processes. And I believe much of my creativity and innovation comes from that.”

She began laying the foundation for a future empire as a child growing up in West Palm Beach, Florida. Hers was a household steeped in southern traditions that emphasized values such as faith, family and hard work. “Mom was a social worker, and Dad managed a Greyhound bus station,” she says. “My grandparents were all domestics, and there’s no shame in that. I’m proud of my pedigree. That’s the evolution of the Black family in America. Each generation strives to do better.”

Back in the early 1980’s, Dunn was hired by IBM. During that era of the then-revolutionary personal computer, she quickly rose through the sales ranks. “I cut my teeth during the golden time of corporate America when many companies gave their employees 12 to 18 months of training,” she says. “I learned how to write a proposal, establish a rapport with clients. None of that training really exists anymore. But along with my own drive, I believe it’s one of the reasons why I’m so successful.” 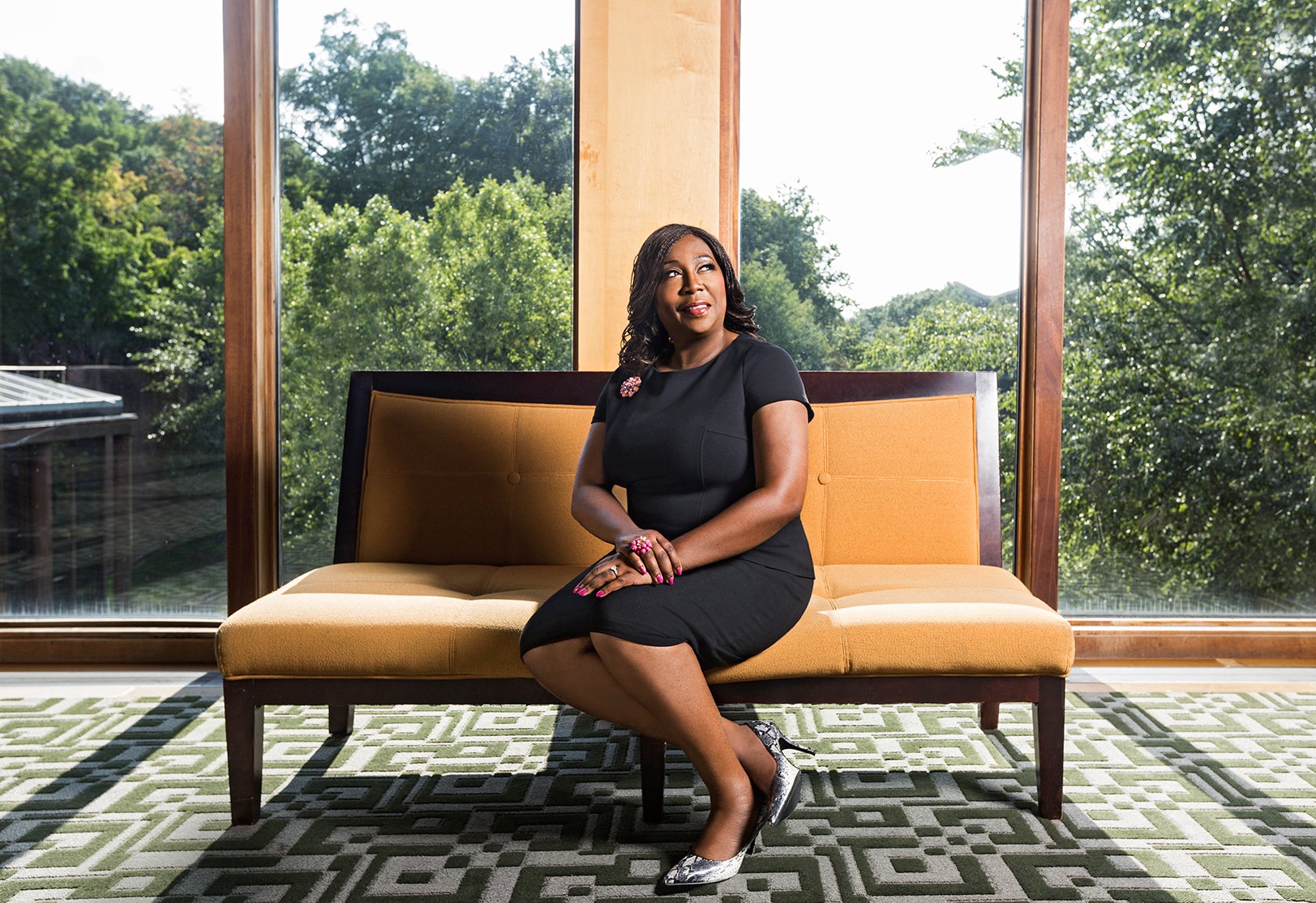 After 14 years with IBM, Dunn left in the early 1990’s to create what she says was one of the first Medicare health care call centers in the country. Since that time, she has launched several other businesses and products, including Odyssey Couleur travel magazine and the Couples Odyssey retreat.

Not all of her enterprises have proved prosperous or sustainable, however. The 2008 recession forced her to regroup and reevaluate. With assistance from friends and experts, Dunn reinvented her business by shuttering parts of the company, shedding products and revamping programs.

“I led my company through some tough times,” she says. “Two times my business almost went under.” Dunn shares that a call to family helped put everything in perspective: “They told me, ‘Well, you can always come home.’ I appreciated that wisdom. It was like, This ain’t all that.” She laughs heartily.

The good news: She survived and is thriving. Today Odyssey Media—the latest business venture for the self-defined “serial entrepreneur”—is an industry leader in the areas of diversity, multicultural marketing and retention of multicultural talent. The company has created a platform for Fortune 500 corporations that want to showcase their brands, connect with potential consumers and suppliers, and highlight their commitment to diversity. Among the ways that Odyssey links them is via its hefty database, which is composed of thousands of multiethnic women. They’re senior corporate executives, seasoned entrepreneurs, business owners, professionals and women in transition.

The company’s signature event is the annual Odyssey Network Business Retreat, an invitation and referral only gathering for 550 influential women of color, typically held at the posh Ritz-Carlton resort in Naples, Florida. “We buy out the entire hotel,” says Dunn of the gathering, which will mark its nineteenth year in 2018 and lasts four days and three nights. “To see hundreds of African-American women arriving in limos and their cars, looking fabulous, is magical.” From sunrise yoga to personal and professional development sessions, the confab is designed to give senior executives a safe and secure environment to discuss candidly everything from salary negotiations to racial and gender bias in the C-suite.

Over the years a veritable who’s who has attended as speakers and distinguished guests: Diahann Carroll, Ava DuVernay, Gladys Knight, Vanessa L. Williams, Holly Robinson Peete and astronaut Mae Jemison, M.D., to name a few. Sheila Johnson, the mogul who cofounded Black Entertainment Television, has flown down in her private jet to address the group. Attendees get a trusted arena to relax with peers. Themed networking dinners are mixed with unique activities such as spiritual coaching, race car driving and golfing as a business tool. Speakers, panels and workshops tackle edgy topics and hard-to-discuss issues. To protect folks’ privacy, there is a strict no-photo policy. And what’s said and done at Odyssey—well, you know the rest.

“Sometimes as a Black woman working in corporate America you feel ignored, unheard, frustrated and, occasionally, like an impostor,” says Kelci Trent, 39, a global director at Bristol-Myers-Squibb who has gone to the retreat three years straight. “The rumor is that women can’t get along, but we make genuine connections. Honestly, somebody cries every single day. There’s a lovely sense of sisterhood. You realize you’re not alone.” Trent, who appreciated that her former employer paid the registration fee—between $3,000 and $5,000—says it’s worth every penny: “Each year I’ve had an amazing experience. I leave refreshed, revitalized and renewed.”

Jerri DeVard, executive vice-president and chief marketing officer at Office Depot, has been a speaker, a sponsor or an Odyssey attendee since its early years. “I’d heard about the event, and when I first met Linda I saw her attention and focus—she’s always upping the game. The conference is never predictable; there’s always something new. And there’s collateral revenue for the vendors, booksellers and others, which is another way of empowering women. She wants each year to be better than the last,” says DeVard, whose 30 years of marketing expertise has bolstered international brands such as The ADT Corp. and Nokia. The Spelman graduate was recently tapped by Under Armour to join its board of directors.

Some of the event’s longtime sponsors—for example, Prudential Financial, Intel, Johnson & Johnson, The Coca-Cola Co., Walmart, Ernst & Young and Mars Chocolate North America, LLC—are also Odyssey clients. Newer clients have come aboard, too: among them Google, AT&T, General Motors, UPS, JPMorgan Chase and Louis Vuitton Moët Hennessy. Karen Horne, senior vice-president of Programming Talent Development & Inclusion for NBC Entertainment & Universal Television, says that NBC Universal has been a sponsor of previous Odyssey retreats and has continued to seek fruitful collaborations. Most recently the group she heads was sole sponsor of Odyssey’s 3rd Annual Writer’s Boot Camp, which was held in Charleston, South Carolina, back in July. “Linda is bringing together a variety of companies and communities, and there’s an appetite for it,” says Horne. “There’s so much untapped talent. It’s necessary that we begin to showcase more diverse voices, particularly those of women.”

Beyond her professional obligations, Horne now regularly attends the Odyssey retreat, where she has relished meeting a sisterhood of like-minded peers. “They understand that we’re not only in the boardroom, we’re juggling the dog, the children, the husband,” says Horne. “Generally, men don’t have to do that. I’ve made true friends from all over the country, and the beauty of it is that I can call on anyone of them for support.”

Like the women at her conferences, Dunn keenly understands what it means to balance family and career demands. Beyond helming Odyssey, Dunn is a featured monthly contributor on Sirius XM as a small-business expert and was recently named to the Federal Communications Commission’s Advisory Committee on Diversity and Digital Empowerment. She serves on the Walmart Women’s Economic Empowerment Initiative advisory board and as a thought leader for the Coca-Cola 5by20 initiative—the beverage firm’s global commitment to enable the economic empowerment of 5 million women entrepreneurs across the company’s value chain by 2020. Still, she stresses that nothing takes precedence over her husband, a physician, and their teen daughter. “She’s the love of my life,” the devoted mom says, gushing. She adds that her family is “very, very private. They grow up so fast and you get about 18 years. I don’t understand parents who don’t have the time. How can you not? So I will fly back home from a business meeting in a heartbeat.”

Besides her own daughter and relatives, Dunn is fiercely committed to mentoring and developing girls. Working in tandem with engineers from GM, she brought in youngsters from the local Boys & Girls Clubs of America chapter for a STEM activity during the most recent Odyssey gathering. She also takes special pride in leading her Girl Scout troop in New Jersey. In fact, Dunn may be one of the most famous troop leaders in the country, thanks to Chris Rock’s mentioning her name during the February 2016 Oscars telecast. During a bit in the awards show, the comedian and father of two shared with Hollywood and everyone watching at home that it was Girl Scout cookie season and he’d missed most of the campaign. “Last night Zahra, my youngest, called me up and said, “Daddy, how come we never sell the most cookies? How come Mrs. Dunn wins every year?”” he says. “It would mean so much to my little girl if we could beat Linda Dunn.” In short order a troop was summoned to the auditorium to sell Girl Scout cookies to the A-list audience. “I was asleep, actually,” Dunn says now, laughing. “Then everyone started calling and e-mailing me.” The shout-out from Rock was all in good fun. He’s a friend she met through his ex-wife, Malaak Compton-Rock: “I recruited her to be a Girl Scout leader. Our daughters were in the same troop and are friends.”

Dunn’s other civic and community ties range from Jack and Jill of America, Inc., to the Links, Inc., to her sorority, Zeta Phi Beta Sorority, Inc. Moreover, she’s helping to groom the next generation of young female entrepreneurs. Back in April, Odyssey Media and Coca-Cola partnered to kick off the Keys to Success Business Pitch Competition in New York City. Participants received information, tools and support needed to pitch their businesses, speak to investors and apply for lines of credit or traditional loans—not to mention a chance to win $25,000 in expansion capital.

Kim Roxie, 35, a Houston resident who launched the company LAMIK Beauty—short for Love and Make-Up in Kindness—was among six finalists welcomed by the Odyssey retreat family during the competition’s judging process. “Just being in the room with women of this caliber was an honor,” she says. Explains Dunn, “The women spent four days on-site getting outstanding advice and then pitched on the final day. When Kim was named [as the winner] onstage, there was rousing applause.”

Roxie received $25,000, and an executive at SheaMoisture matched that amount, which was divided among the other finalists. The budding mogul says her business has already turned additional profits:

“It’s gone to a whole other level. What Linda has done for me is priceless. In the end we’ll be judged by our legacy.”

This article originally appeared in the November 2017 issue of ESSENCE.