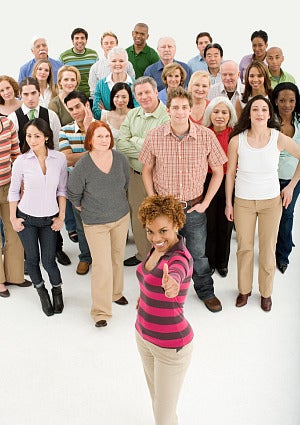 Ushering in a new way of documenting previously “undercounted” populations like African Americans and Hispanics, the 2010 Census kicked off the largest civic outreach and awareness campaign in U.S. history in New York’s Times Square this week.

The “Portrait of America” bus tour–which will be making stops at 800 events nationwide between January and March–hopes to raise awareness about the importance of everyone participating in the Census, which determines how much of the $400 billion in federal funds is allocated to communities for services like foster care, Medicare and school funding. It also helps to determine congressional representation.

Visitors to any of the “Portrait of America’s” 13-bus fleet will be able to see a sample Census form and record their stories in a video kiosk, which will later be available online at 2010census.gov.

New York Regional Director Tony Farthing spoke on how the messaging of this year’s Census is not like that from year’s past. “This campaign is different,” he said. “We realized that our messaging has to be different when speaking to diverse communities.” This year’s census is also the shortest in history–just 10 confidential questions about race, age, marital status and date of birth.

In New York Farthing and his team are pulling out all the stops, even targeting public housing complexes, which are historical enclaves of African American and Hispanic populations.

The 2000 Census undercounted an estimated one million African Americans and Hispanics while double counting some two million Whites, say civil rights leaders. This year, however, civil rights organizations like the National Urban League and the NAACP are partnering up with the Census Bureau to create awareness nationwide particularly for minority communities in an initiative called Count on Change 2010. “We’re trying to be much more direct,” said Farthing. “We’re trying to get a better idea of where the gaps are and addressing them.”