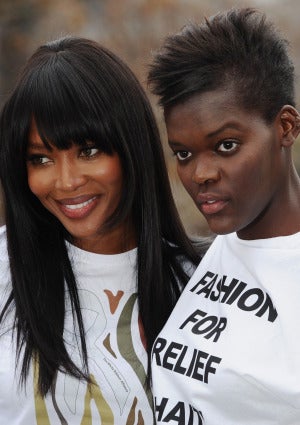 Are you a cardmember? You may wish you were this weekend, as American Express has partnered with Naomi Campbell for the “Campbell’s Fashion Relief Haiti NYC 2010 Runway Show” at Mercedez-Benz fashion week. Who’s who in fashion and entertainment will be flocking to NYC’s Bryant Park next week to catch all the latest styles for Fall 2010 and Campbell’s secured a spot at the Tent for Haiti on Friday February 12 at 7 p.m. The show will feature a host of celebs from actors to musicians strutting down the runway to raise funds for the CARE organization, which is working to rebuild Haiti’s healthcare system for its mothers and children. Here’s where being a cardmember comes in–Amex card holders have been give exclusive acces to purchase tickets for the show early from today through Monday, February 8 at 9:59 p.m., when sales open up to the general public. Campbell’s planning on donating all the proceeds from the tickets which sell for $100 and $150 to CARE. With the music and film worlds pulling together to help Haiti in a major way, we’re glad to see that fashion is in on to the trend. Read More
Loading the player...