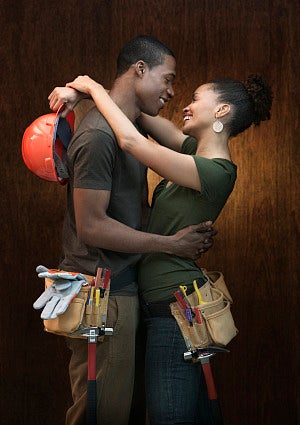 When it comes to matrimony it’s always assumed that a man will marry a woman who makes less money than him, unless you’re Jay-Z and Beyonce, or Oprah and Steadman, in which case the opposite is true. And let’s admit that most college-going women are prepped to believe that a suit and tie is most suitable. What happens when the suit and tie is harder to find because women are outpacing men on college campuses and the workplace? New marriage trends as reported by the Pew Research Center show that more educated women between the ages 30 and 44 are choosing men who are less educated, and earn less than they do. Of the women surveyed (in 2007) 22% made more money than their husbands — that’s up from four percent in 1970. Women are also getting more advanced degrees than men according to the U.S. Census. For Black women, there are 700,000 more of us with college degrees than there are Black male graduates. Take 33-year-old Yazmina Watts who recently told CNN that despite getting a Ph.D in political science she chose to marry a warehouse supervisor and makes double his salary. “I’ve met and dated plenty of people with Ph.D.s, and it doesn’t mean they are smarter,” said Watts. “He might not have the degree, but he’s got a lot of talent.” “The supply of men has changed,” D’Vera Cohn, senior writer at the Pew Research Center’s Social and Demographic Trends project told CNN. “The pool of college educated men isn’t growing as rapidly as it is for women.” Christina B. Whalen, author of  “Why Smart Men Marry Smart Women,” thinks that most educated women still prefer a man on the same social class, which often means he has a degree of some sort. What do you think? Would you consider marrying a man who makes less money than you?