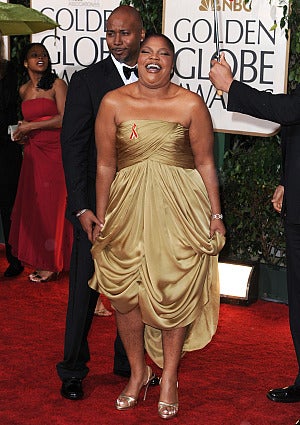 When photos of Mo’Nique on the red carpet of the 40th Annual NAACP Image Awards sporting a knee-length red dress revealing her hairy legs started floating around, people started asking, “What’s up with that?” When she hiked up her gown due to the rain at the more recent 2010 Golden Globe Awards, more folks chimed in. Now it’s Mo’Nique’s turn. On Barbara Walters’ upcoming annual Oscars special, the Academy Award Nominee said her hubby actor Sidney Hicks likes her un-shaved legs, NY Daily News reported, “and if Sid likes the hairy legs, there you go,” she said. Mo’Nique went on to say that she “tried shaving one time, and it was uncomfortable and painful. I said never again would I do that to myself.” The “Precious” star also took the time to explain her claims that she and Hicks have an open relationship. “Let me say this: I have not had sex outside my marriage with Sidney,” she makes clear. “Could Sid have sex outside of his marriage with me? Yes. That’s not a deal breaker,” she continues. And what if he steps out multiple times? “What if it’s been 20 times? So what? We’ve been best friends for over 25 years and we truly know who we are,” Mo’Nique explains. “Oftentimes, people get into marriages and they don’t know who they’re laying next to. I’m very comfortable and secure with my husband.” Read more:
Loading the player...

The CDC Wants You To 'Avoid' Travel To These Beloved Caribbe...