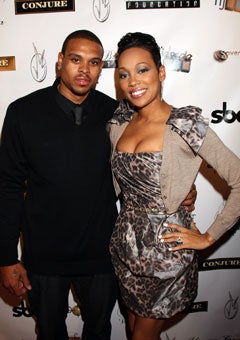 Three hundred lucky people received a very special surprise in the mail last week. Extravagant invitations to Monica and Los Angeles Lakers guard Shannon Brown’s official wedding ceremony went out — and the who’s who of entertainment that received them are all atwitter about the pair’s upcoming big day.

Monica and Shannon surprised their fans by announcing they’d gotten married in a secret ceremony at their L.A. home last November.

The two lovebirds shared photos on Twitter shortly thereafter and have since hinted that a more official wedding was in the works for family and friends. Their second big day is set for July 9th, at an undisclosed Los Angeles location.

Folks in her hometown of Atlanta are especially excited about the news. Ryan Cameron, a popular deejay at the city’s C-103 radio station, proudly announced on his show that he’d received one. The invitations were designed by Sanid Spells of Sandi Spells Design. “I would say this is probably the most extravagant design I’ve created,” Spells said in an interview.