By clicking Sign Up, you agree to our Terms of Use and that you have read our Privacy Policy
Skip to content
Nathan Congleton/NBC/NBCU Photo Bank
By Kimberly Wilson · Updated October 23, 2020
Michelle Obama has given boss woman goals ever since we were introduced to her on the campaign trail back in 2006. One of the most popular first ladies in history (for good reason), due in part to her intelligence and charisma as a public figure. Her Becoming memoir is on track to become the hottest book since 50 Shades Of Grey and is among the top 10 titles of the decade, according to CNN. Did we mention the book is barely two months old? Take a look at just a few of the times our forever First Lady gave us boss woman goals. When ‘Becoming’ became the best-selling book of 2018 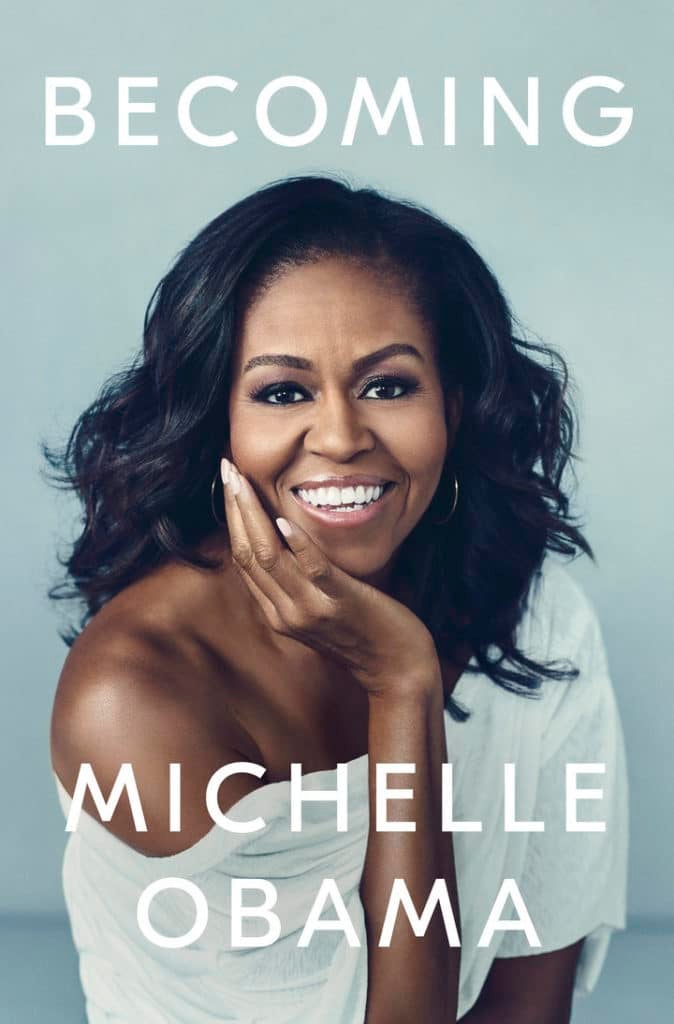 Michelle Obama's Becoming easily became the bestselling book of 2018, and it came out last month! Our forever first lady even promoted the book -- no, not on some measly book tour -- but a stadium tour, featuring Oprah Winfrey, Valerie Jarrett and Tracee Ellis Ross. The book is also full of life lessons to ensure your 2019 is more fabulous than this year.

Michelle Obama shut down all the naysayers (*ahem* Donald Trump) when her memoir Becoming sold 1.4 million copies in its first week. Books flew off the shelves, as eager readers thirsted for a glimpse into the life and legacy of the former First Lady. Business was booming so much so, that she added 21 new appearances to her international book tour to promote her memoir. When she encouraged kids to live their best, most healthy lives 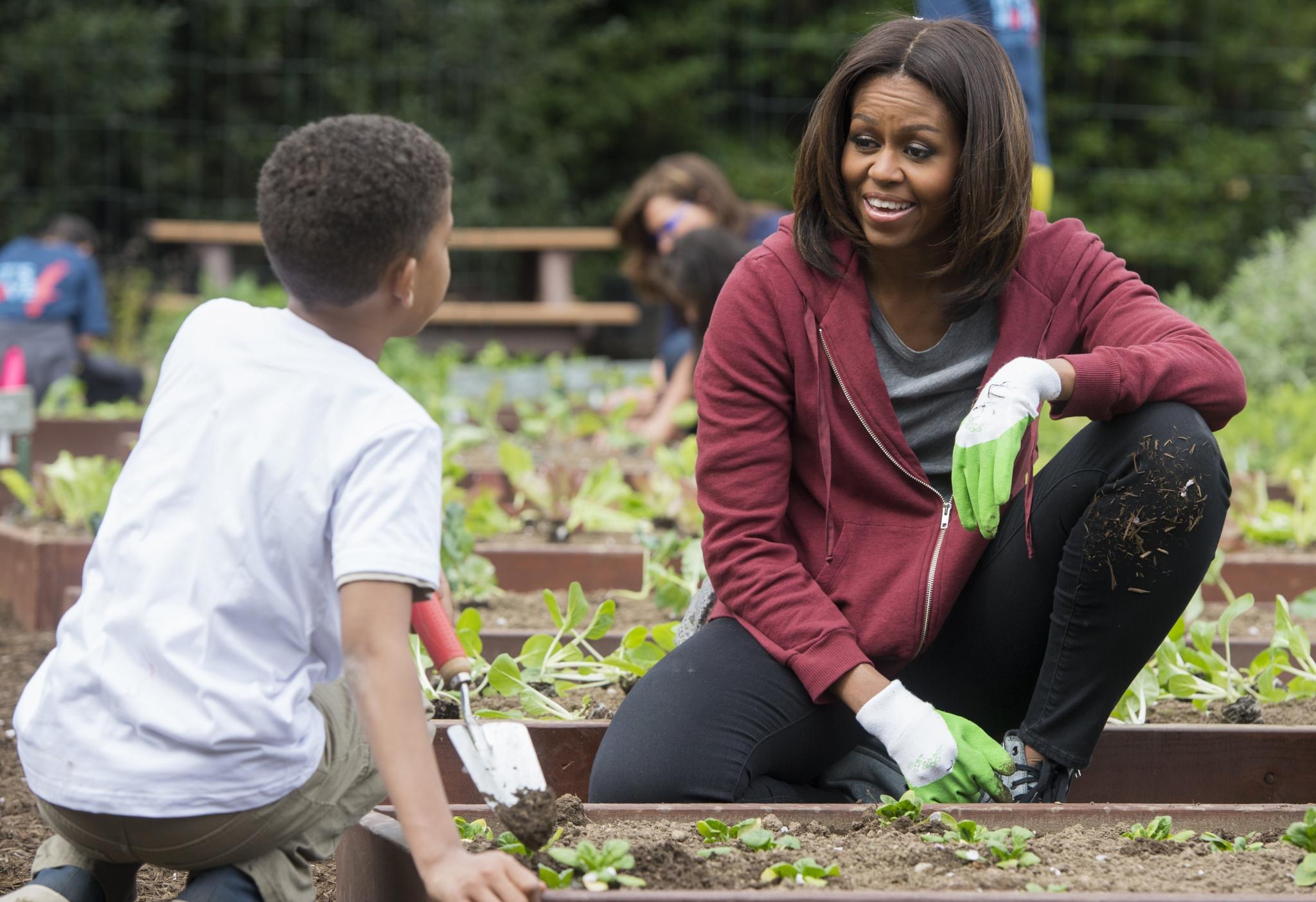 The doyenne of healthy living, First Lady Michelle Obama, has been an advocate of a healthy lifestyle ever since her husband took office. Her "Let's Move" campaign aims to raise a healthier generation of children.

The ‘Let’s Move’ campaign was quite possibly one of the most epic initiatives that Auntie Shelly gave us during her time as First Lady. Above all, it not only taught kids, but adults as well, the importance of preserving our mind, body and spirit. Not to mention, it was definitely one of the shining accomplishments of her White House reign. A true boss understands the importance of “getting to moving” and if you’ve ever seen a sleeveless Michelle Obama, than you know she also practices what she preaches. When she doesn’t throw shade, but speaks facts 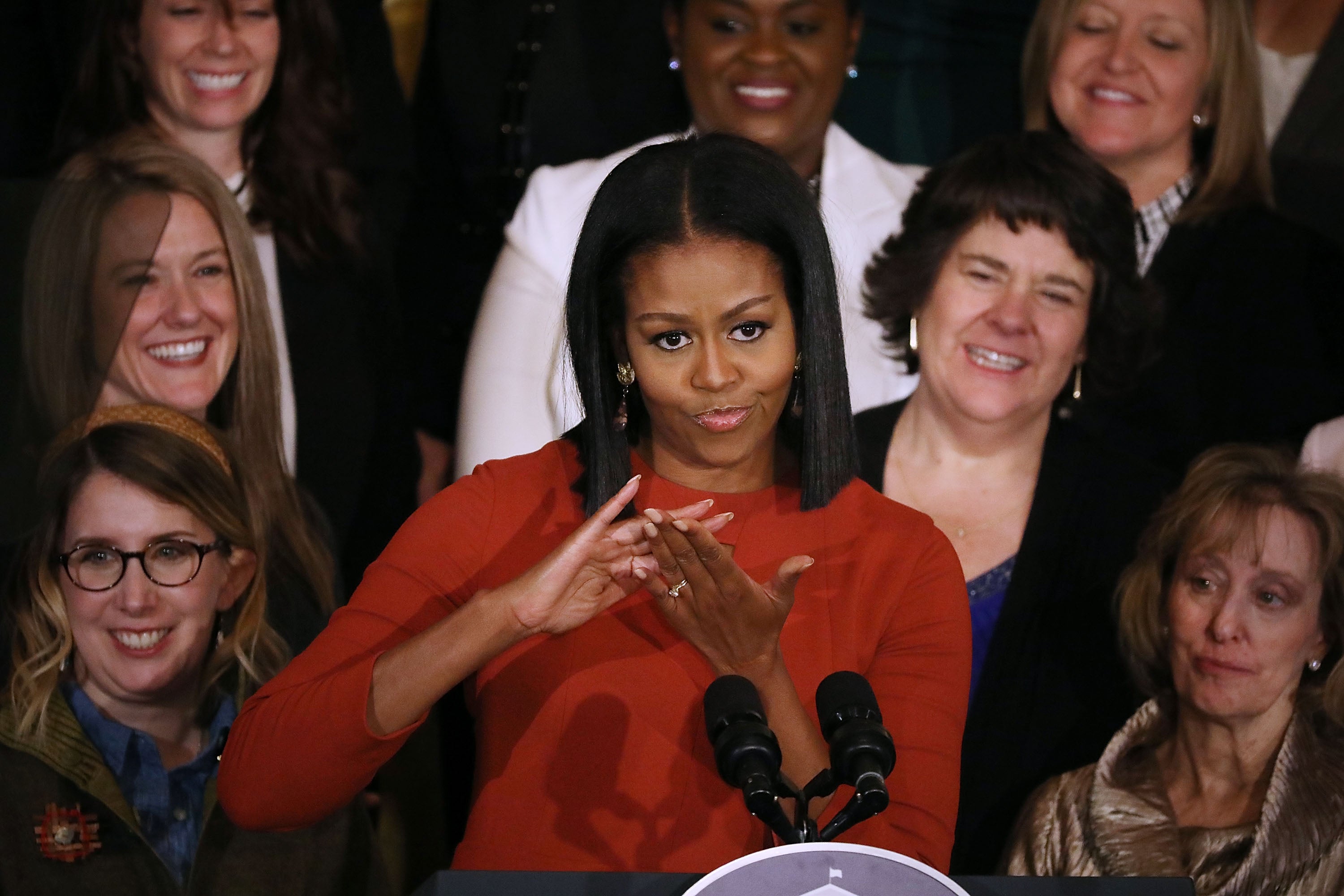 Who could forget the FLOTUS' perfect bob during her last public speaking event inside the White House? So fab!

One too many episodes of Real Housewives of Atlanta will certainly provide a lesson in shade throwing. But Mrs. Obama knows when (and when not) to let the Southside of Chicago girl out. While appearing on The Late Show with Stephen Colbert in November to promote her memoir, the former First Lady spoke on how she and her family maintained a “moral compass” while living at 1600 Pennsylvania Avenue, which is something we can’t exactly say for the man who is currently in the chair. Colbert asked how she feels about the “next occupant of the Oval Office” being “indifferent” to ethical responsibility. “The margin of error was small, and we felt that,” she said. “Barack couldn’t golf. You know, we could just start there. There’s so much that would have been an outrage for us and we knew it. There wasn’t any room for anybody in our administration to be indicted… We had to be highly ethical. We showed our taxes, we divested our money. This isn’t shade. This is just the sort of stuff we had to think about doing.” But Mrs. Obama was just speaking facts, “This isn’t shade, it’s truth,” she said. When she showed us that a true boss takes the high road 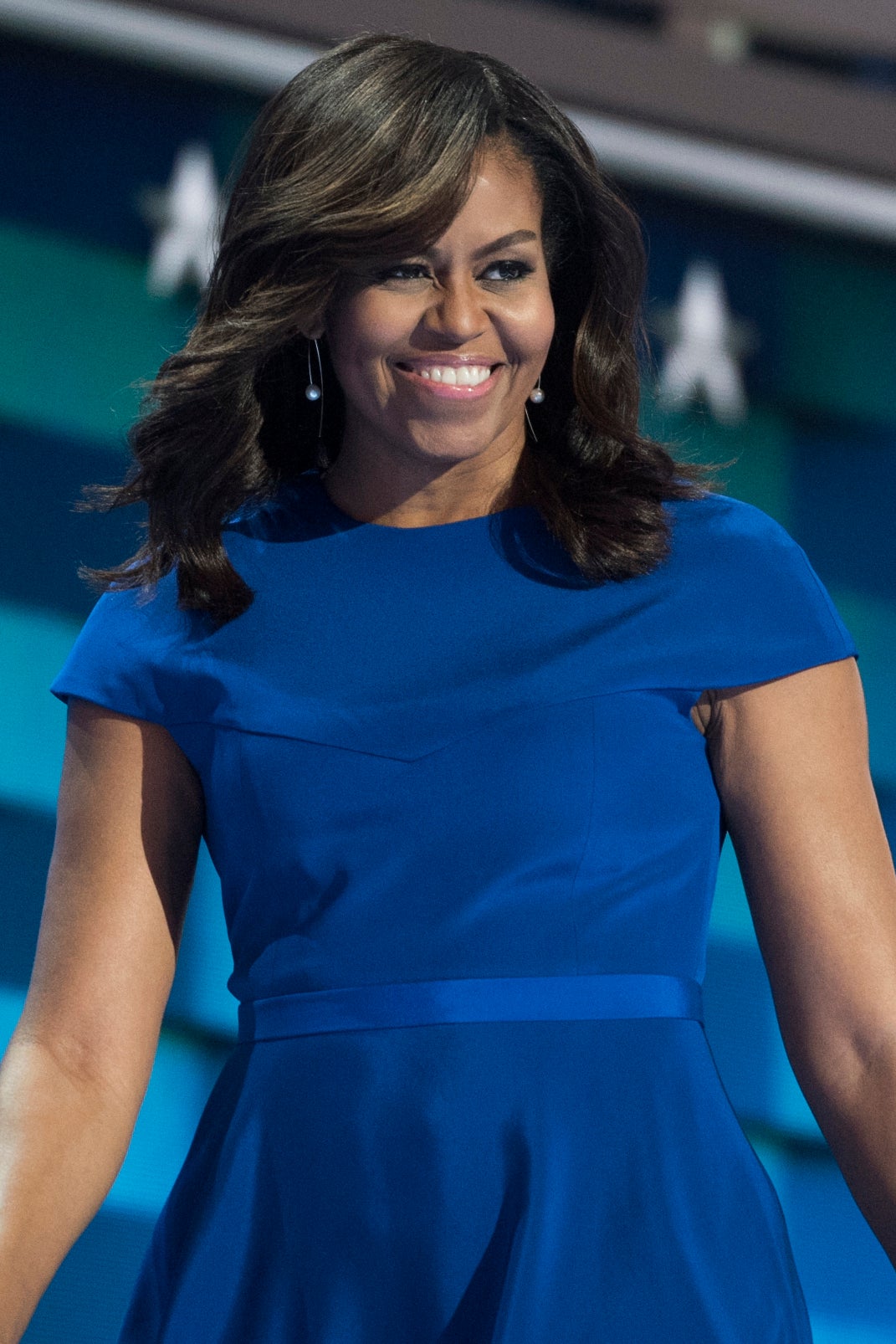 Perhaps one of the most memorable moments of witnessing her class, was during Michelle Obama’s 2016 Democratic National Convention speech, when she left us with one thing: “When they go low, we go high.” A life lesson for all of us, she showed us that when negativity comes your way, rise above it. When she told us not to ask for a seat at the table, but to create one 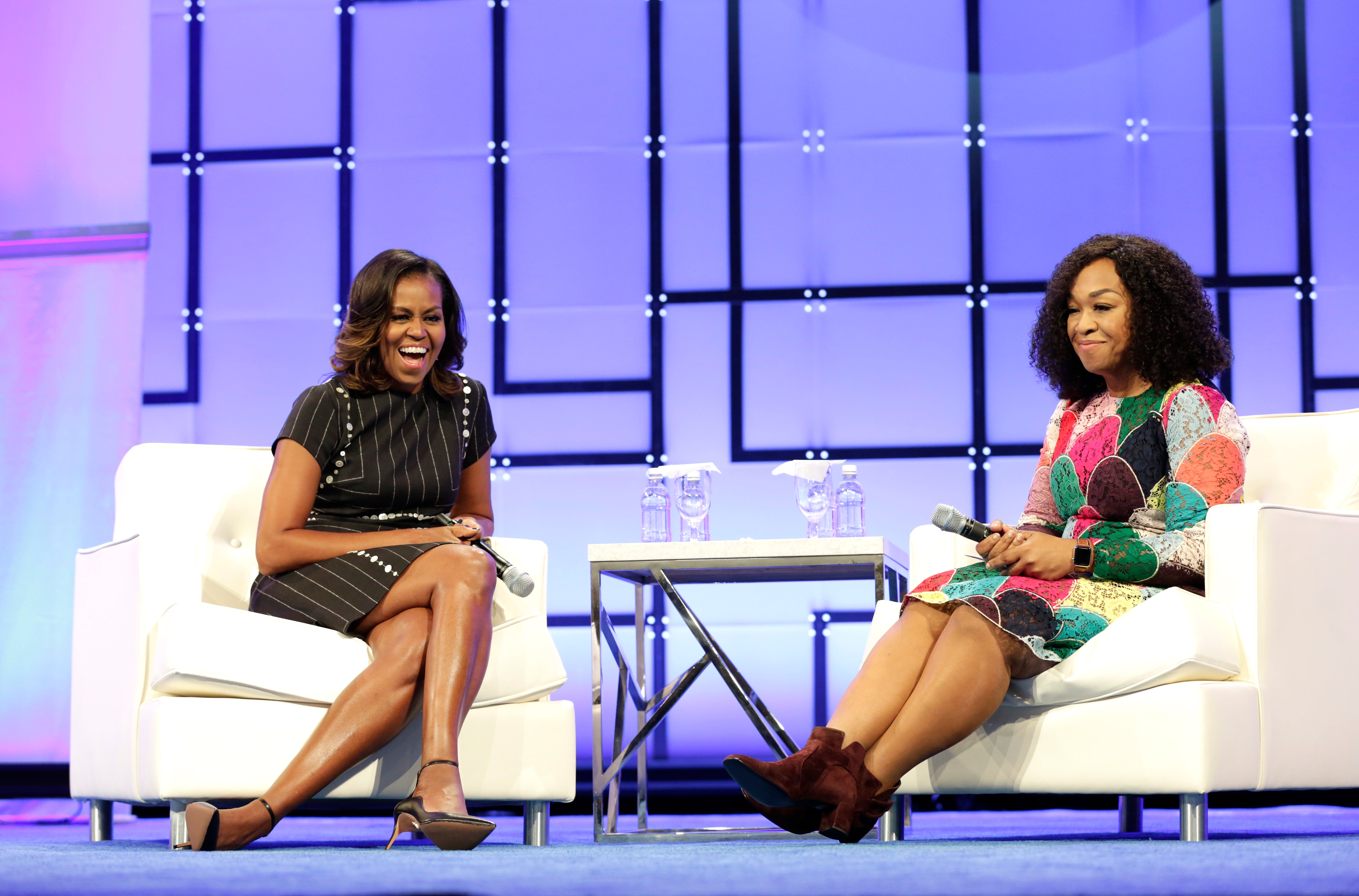 Michelle Obama and Shonda Rhimes at the 2017 Pennsylvania Conference for Women.

At the 2017 Pennsylvania Conference for Women, Shonda Rhimes and Mrs. Obama dropped an entire notebook full of gems on us during their one-on-one conversation. More importantly, the Princeton University and Harvard Law School graduate, Mrs. Obama, spoke about the need for women to voice their opinion in order to activate the change they want to see. “Don’t waste your seat at the table,” Philadelphia Business Journal reported her saying. “If you are scared to use your voice, then you’ve got to get up and give it to someone who isn’t afraid to use the spot.” Obama recalled the time when speaking up earned her a flexible work schedule at the University of Chicago Medical Center. When she exudes self-confidence with every room she walks into 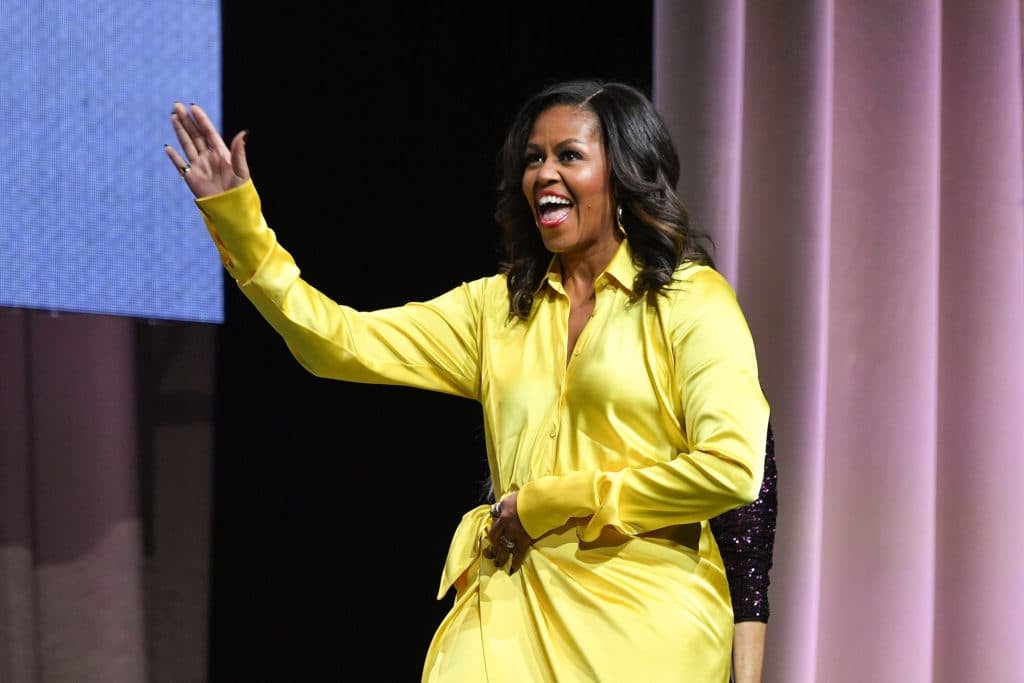 It’s safe to say, that Michelle Obama is a fashion icon. But above her style, she demonstrates a self-confidence that wears better than any gown she’s ever been in. Whether it was her uplifting DNC inauguration speeches or championing courage and self-esteem for women, Michelle never shied away from firmly standing up for what she believes in and this confidence is exemplary for any leader in training. She’s got an amazing sense of style and self-confidence, an important characteristic for any boss woman. When she champions for education 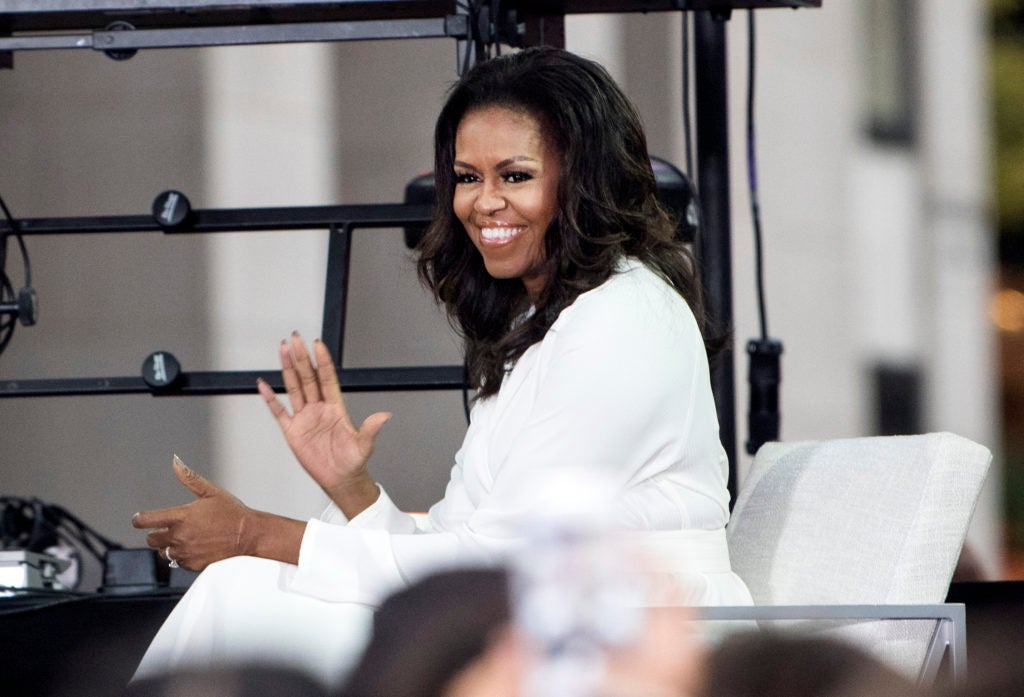 Michelle Obama Celebrates International Day of the Girl on NBC's "TODAY" at Rockefeller Plaza on October 11, 2018 in New York City.

There’s no bigger champion for women and girls, than Former First Lady Michelle Obama. Her biggest goals for girls around the world? Education. As of recent, she has championed this through the launch of an international program that aims to support groups and community leaders who work to educate girls around the world: The Global Girls Alliance. This initiative is a collective of smaller, grassroots organizations working to get girls in school and get them educated. In her role, Obama will work through the Obama Foundation to highlight those groups, promote their work and steer donors their way. Who run the world? Girls.