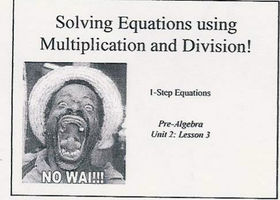 A mother of a student at Lenape Middle School in Pennsylvania called a math worksheet that her some son took home racist. The worksheet featured the image of a Black man in a straw hat, shirt and suspenders, mouth wide open with almost no teeth. The caption at the bottom of the image read the misspelled, “No Wai!!!”
The boy is the only black student in his eighth grade pre-algebra class and was teased by other students when the teacher handed out the assignment.

The math teacher, Matthew Curran, said he used the image because it used the phrase “No way,” which is what his students normally say when they get assignments that “require them to show each calculation.”

The Bucks County, Pennsylvania, NAACP President John Jordan said the event in the classroom, “brings into question whether all of our children are being provided a safe and fair environment in which to learn.”
The eight-grader is staying at home until his mother feels things at school are safe enough for him to attend.
photo: phillyburbs.com