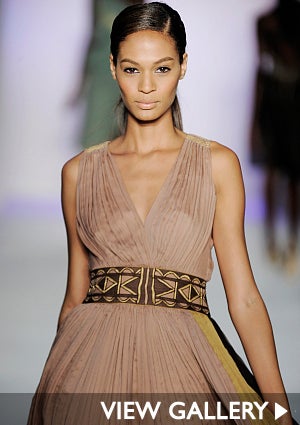 If you don’t know Joan Smalls’ name yet, you will. The Puerto Rican beauty was one of the most wildly in-demand models of the Fall 2010 Fashion Week season–no small feat, after primarily being known as a catalog model for most of her three year career. Her big moment came in January, when Smalls made a surprise appearance in the all-important Givenchy Haute Couture show in Paris. Next thing you know, she’s working every major fashion show in New York, Milan and Paris–and killing it! The cheekbones, the piercing eyes, the caramel skin…whatever “it” is, Joan Smalls has it in spades (of course, we always knew she’d be a star! Last September, we had the fledgling model keep a diary for us as she journeyed through castings, fittings and shows during the Spring 2010 season!). Here, in honor of Small’s game-changing runway season, we’ve compiled a gallery of the top model’s most memorable fashion moments. (Do you want to model? ESSENCE is looking for the next “It Girl”. Check it out…) Read More: