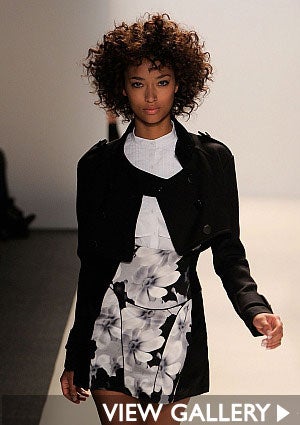 From Marc Jacob’s “Taxi Driver”-inspired show to the kewpie doll makeup at Badgley Mischka, there were a zillion standout moments at New York Fashion Week. But for us, one of the most exciting moments was witnessing the meteoric rise of up-and-coming supermodel, Anais Mali. Raised in France, the daughter of a mother from Chad and a Polish father, Mali signed with Wilhelmina only a year ago–and almost overnight, she was walking in shows like Vivienne Westwood and Betsey Johnson, and appearing in campaigns for J. Crew and Levis. With her corkscrew curls, cinnamon-kissed complexion and coltish legs, we predict that this French femme fatale will have a fabulous career! Here, some of her most memorable fashion moments over the past year.