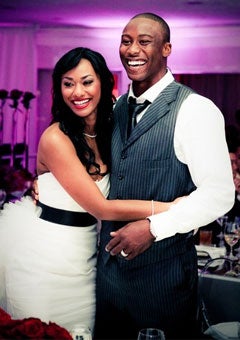 Just 10 months after her fairy tale wedding to Miami Dolphins wide receiver, Brandon Marshall, Michi Nogami-Marshall tells police that she acted in self defense when she stabbed him in the abdomen with a kitchen knife.

Nogami-Marshall, 26, was arrested last Friday and charged with aggravated battery with a deadly weapon. She was released a day later on $7,500 bail. Meanwhile, Marshall was rushed to the hospital where he underwent emergency surgery.

He was soon released and sent home, where doctors believe he will have a smooth recovery.

Today, Miami police released a recording of a woman whom they believe to be Nogami-Marshall calling 911. “Please come, it’s an emergency,” she said before hanging up the phone.

Police are now conducting a thorough investigation of the incident, and no other information has been released.