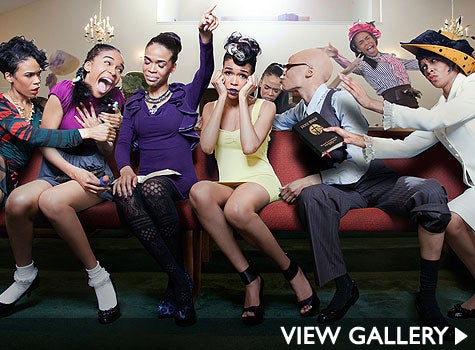 Michelle Williams is the latest celebrity to be photographed by well-known photographer Derek Blanks for his “Alter Ego” series. Titled “Judge Not,” the photo features the former Destiny’s Child member as a number of different Baptist church congregants of the same church. Blanks debuted the photo via his Twitter account last night (Nov. 15). Williams also retweeted the photos as well as other photos Blanks shot of her. “Did y’all see me wayyyyyy n the back of the church being an usher in the pic? Cuz I use to be one growin up!!!! LOL!!!!” she tweeted last night. Williams recently wrapped her run as Roxie Hart in “Chicago” in London’s West End, while Blanks has recently shot “The Real Housewives of Atlanta”  for the Bravo show.
Loading the player...