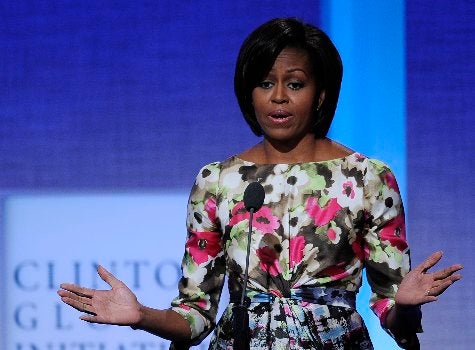 Michelle Obama has long been outspoken about children adding a bit more exercise to their daily routines through her “Let’s Move” campaign. It makes perfect sense that the folks at Nickelodeon would ask the First Lady to help with their “Worldwide Day of Play.” Tomorrow, Saturday, September 25 at 12 pm ET, Nickelodeon, Nicktoons, Nick Jr. and TeenNick will go off the air for three hours and FLOTUS herself is pulling the plug on programming, AP reported. The networks’ corresponding websites will also go dark. In a taped message, Michelle Obama tells Nick viewers to “get ready to shut down your computers, put down your cell phones and turn off your TVs.” The message will play at noon ET. The First Lady is known to keep a close watch on what daughters Malia and Sasha’s TV time, limiting them to Nickelodeon and the Disney Channel only on the weekends. What do you say? Are you and the kids going to get out and play tomorrow?