“We were all very excited,” said Cabell, 19, a marketing major from Appomattox, Virginia. “It made my day.”

The First Lady was greeted by cheers and a standing ovation from students when she strode onto a stage inside Howard’s School of Business auditorium. Obama’s stop at the historically Black university is part of her “Reach Higher Initiative” which encourages youth and others to attend and complete college, and  “Better Make Room,” an educational campaign on social media.

Obama was joined by NBC Late Night host, Seth Meyers, and entertainer/mogul Nick Cannon, who recently entered the university as a freshman. The trio answered students’ questions for about 30 minutes, offering advice and wisdom on succeeding in college and life.

“College was the most important thing I’ve done in my life, other than being First Lady, having kids and marrying Barack Obama,” said FLOTUS, who attended Princeton as an undergraduate, then Harvard law school. “It taught me I could leave home and be successful away from home.”

Appearing relaxed, the First Lady told the nearly 250 or so students assembled to be confident and courageous in terms of seizing new opportunities and trying new things.

“Step out of your comfort zones…,” she said.

Meyers asked Cannon, who is in his 30s and a father of two children with ex-wife Mariah Carey, why he decided to return to school, given that he already has a thriving career. 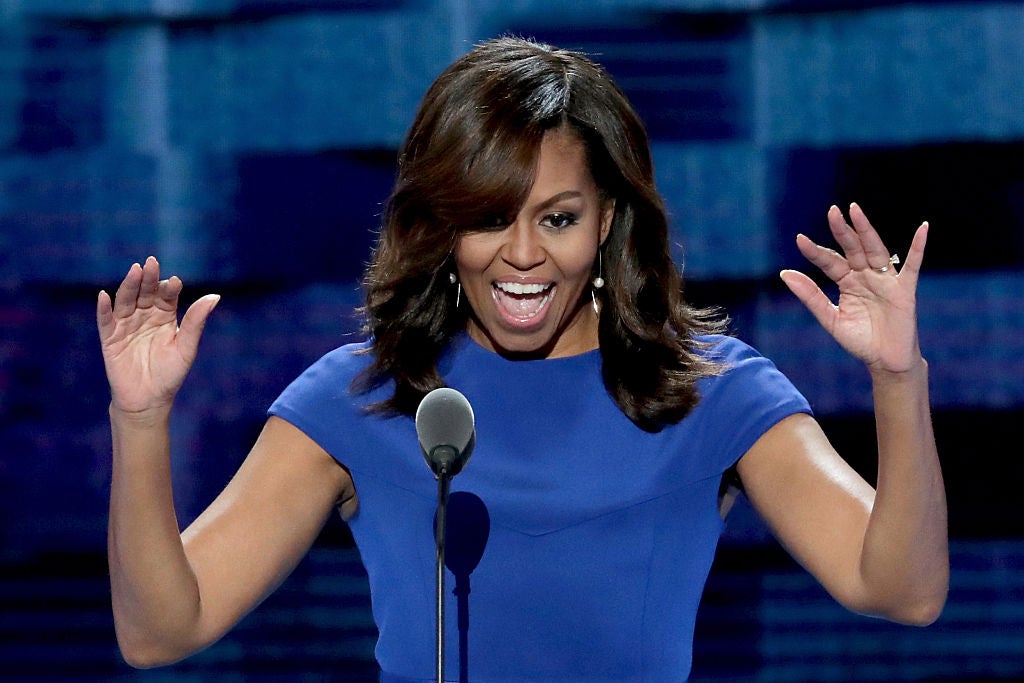 “I’m not here for a degree,” said Cannon, who was dressed in a orange dashiki. “I’m here because I have a real thirst for knowledge.” He added that his younger brother is also a student at Howard, known in Black education circles as “The Mecca.”

The First Lady told the students that Cannon should serve as living proof that they have ample time to get their studies and everything else done. “You have time to handle this,” she said.

At one point, Cannon took a mic into the audience so students — many of whom were sharply dressed in business attire — could ask questions.

The queries ranged from what she was like in college to what she would change about her freshman year.
“I probably would have tried more things,” Obama said. “I would have taken more risks….push past your comfort zone.”

Recalling that before she entered the Ivy League, people suggested she was aiming too high, she soon realized she was capable and just as smart as her peers.

“I still carry that with me as First Lady of the United States because there are people who think I shouldn’t be doing that either. And it’s been eight years,” she said, chuckling wryly.

Obama suggested that students choose a major they find intriguing, and to seek internship opportunities. She noted that her personal assistants are all former White House interns who made great impressions. “My life is controlled by 20-something year-olds. It’s really annoying,” she joked.

Asked how to de-stress constructively, the First Lady encouraged the young men and women to hang out with friends and laugh.

The event, which was taped, is slated to air next week.

Before the First Lady arrived, the university’s provost introduced Amber Ruffin, said to be the first African-American woman to write for a network late night show.

“Congratulations on making it to Howard!” Ruffin told the crowd. She praised the ingenuity of the students, many of whom said they already owned businesses, or had future plans to do so.

“I want to open a financial advising firm,” said Logan Mitchell, 20, a junior Finance major from Oklahoma. “I loved what the First Lady told us about reaching for our dreams.”

“It was truly inspiring to hear her perspective. As I matriculate, it will help me avoid pitfalls and recover so that I can be successful.”