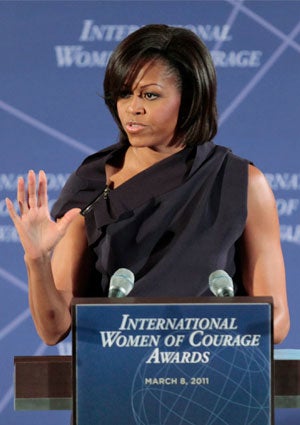 On Tuesday, Michelle Obama shared the stage with a group of powerful women who gathered to celebrate the 2011 International Women of Courage Awards. As the ceremony continued, one honoree, sitting to the right of the First Lady, was so touched that she began crying. As her tears fell, Mrs. Obama reached over, squeezed her hand and flashed a smile.’

Held on the 100th anniversary of International Women’s Day, the awards were an emotional toast to the resilient nature of ten female leaders* from all over the world. Some had risked their own lives to fight for equality, freedom of the press and democracy.

Throughout her time in the White House, Mrs. Obama has made it clear that human rights issues are important to her. She has raised awareness for the needs of military families and just this week, the White House released an anti-bullying video featuring the President and First Lady. However, as a mother of two daughters, Mrs. Obama considers women’s rights especially significant.

“Everywhere she goes, she sends an unmistakable message that she and her husband … have two daughters that they love and support and are providing the direction and discipline that is needed to raise children. And they hope, as we all do, that every child would have the same opportunity,” said Secretary of State Hillary Clinton, who hosted the ceremony.

As the honorees posed for photographs with Mrs. Obama and Secretary Clinton, supporters from their home countries waved and cheered. Some donned traditional African garb while others wore hijabs in bright, sequined pinks and blues. Many hailed from countries where they often lived with repression and fear, but on this day they chose to celebrate the achievements of one of their own.

“That is the thread that runs through all of these women’s stories — that each time these women speak up they inspire others to use their own voices. Their fearlessness inspires others to overcome their own fears,” Mrs. Obama said.

The same night, the First Lady spoke at a White House reception commemorating International Women’s Day and celebrating Women’s History Month. She hoped the event would illuminate the importance of investing in the futures of young women and girls in the US and abroad.

“That’s why we hold this event every year here in America’s capital. We do this to send a clear message to all of you, our Women of Courage, and to women like you around the world that you are never alone in your struggle,” Mrs. Obama said.