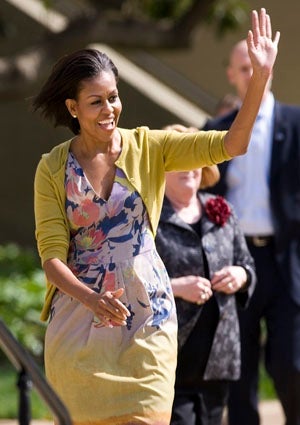 The audience at Thursday night’s performance of “Fela” on Broadway got a huge surprise when the First Lady walked in! Michelle Obama and six of her girlfriends entered the Eugene O’Neill Theatre on 49th Street in Midtown Manhattan just as the overture was ending to see the Tony Award-winning musical about Fela Kuti, the Nigerian Afrobeat artist and political activist. “When the audience realized that she was in the audience, they just went nuts,” said Stephen Hendel, who co-conceived and produced the show. “People started standing up and applauding, saying ‘We love you!’ and ‘We love you, Michelle!’ It took a minute or so to get the audience to settle down.”

Hendel was one of a few people who knew ahead of time that the first lady was coming, but the performers and dancers in the show, including the legendary Patti LaBelle, only learned 20 minutes before they were to get on stage.

Hendel said that “the whole place just exploded” in cheer when the musical made reference in the first act to one of Fela Kuti’s nicknames: Black President!

Secret Service was at the event and made a special request to the performers to not change their routine but to give Mrs. Obama some space. At the end, Mrs. Obama and her friends gave a standing ovation and congratulated the cast afterward.