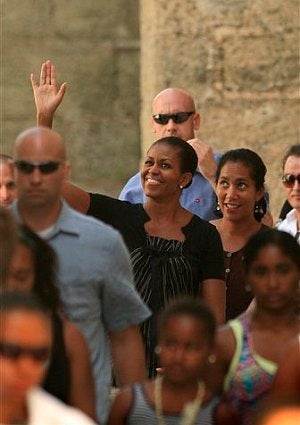 “Lavish,” “glitzy” and “glam” are just a few ways First Lady Michelle Obama’s vacation to Spain is being described by critics. For some, the First Lady’s quiet Mediterranean vacation is an example of an administration that’s out of touch with the economic woes of everyday citizens. The New York Times reports that Mrs Obama is is traveling as a private citizen and footing the bill for her room, food and transportation, though the government has to pay for security costs and the use of Air Force Two. But that hasn’t stopped critics from labeling Mrs. Obama a “modern-day Marie Antoinette — the French queen who spent extravagantly on clothes and jewels without a thought for her subjects’ plight.” While the White House says it won’t get comment on what some are labeling a “faux-scandal” press secretary Robert Gibbs said the First Lady is on a mother-daughter vacation with nine-year-old Sasha. Other officials also say the number of friends Mrs. Obama is traveling with is not 40 as previously reported, but two friends and four of their daughters. And while Mrs. Obama flew on Air Force Two, her friends took commercial flights. What do you think? Are people overreacting to the First Lady’s vacation?