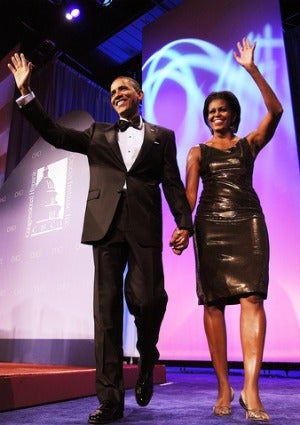 Though we’ve seen the First Couple go on numerous dates and share plenty of romantic moments, we’re almost shocked to know that Valentine’s Day is no big deal in the White House. First Lady Michelle Obama recently opened up about why laughing keeps her marriage going — and why V-Day isn’t that important to the First Couple…

According to the Huffington Post, Mrs. Obama says laughing is what keeps her soon-to-be 19-year marriage going. “I think in our house we don’t take ourselves too seriously, and laughter is the best form of unity, I think, in a marriage. So we still find ways to have fun together, and a lot of it is private and personal. But we keep each other smiling and that’s good. Got to keep the romance alive, even in the White House,” she said.

As for why Valentine’s Day isn’t a big deal to the First Couple, “… because my birthday was the 17th (of January)” and before then was Christmas, “So by February 14th, we’re kind of tired,” she added. Though she hinted she would like some jewelry on V-Day.

It’s fascinating to know that the first couple keeps their marriage fresh by laughing and enjoying each other’s company. How do you and your partner keep the romance going?