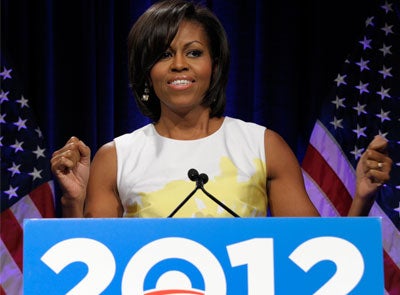 First Lady Michelle Obama launched her military family initiative over a month ago with Dr. Jill Biden. In the days after, the country was preoccupied as her husband was forced to prove his citizenship, a team of Navy Seals killed the world’s most wanted terrorist, and she showed us all that she knew how to “dougie.” However, this week, Mrs. Obama officially stepped into the 2012 presidential campaign season by proving that she hasn’t forgotten about her core base of women and military families.

On Wednesday, she spoke in a conference call to faith-based groups about how they can get their congregations involved in military outreach. “It’s important for you to understand that you don’t necessarily have to be an expert in military family issues to make a difference. You can build on what you already do best, whether it’s family counseling programs that you already have. Maybe you have a youth ministry or a career-mentoring program that’s already in existence. And you can work and ensure that you’re helping families in your congregations and in your communities,” Mrs. Obama said.

The next day, she led congressional spouses in a service event at Joint Base Anacostia-Bolling in Washington, D.C. The group painted a mural and benches at the Base’s Youth Center, which serves 300 children of military parents. Mrs. Obama urged all Americans to get involved in community projects that would uplift and support the armed services.

Earlier in the day, the First Lady gave the keynote address at the Women’s Leadership Forum National Issues Conference, hosted by the Democratic National Committee and Obama for America. She spoke about her husband’s accomplishments in office — health care reform, repealing “Don’t Ask, Don’t Tell,” nominating two women to the Supreme Court — and then returned to her two focal issues: childhood obesity and military outreach. “We’re working hard to get better food into our schools and our communities and to help parents make better decisions for their kids,” Mrs. Obama said. “…The second issue is one that I came to on the campaign trail, meeting so many extraordinary military families. …And that’s why Jill and I launched a nationwide campaign to rally our country to serve them as well as they serve us.”

She finished by asking the women a simple question about their dedication to her husband’s 2012 re-election effort. “Are you in?,” Mrs. Obama asked. “Because I’m in. And I hope that all of you are fired up.”