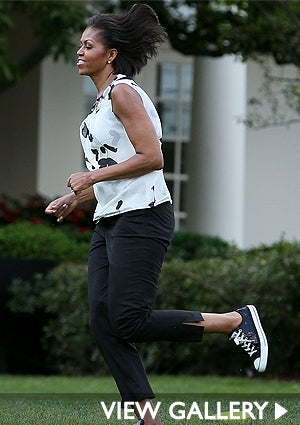 The White House has announced that Michelle Obama will address the NAACP’s 101st Annual Convention on July 12th to discuss her “Let’s Move” campaign, which targets childhood obesity. Since day one, the First Lady has made her main focus the health of the country’s youth. Perhaps it’s because she has two daughters of her own to take care of, or perhaps she is just wise enough to see that the childhood obesity rate is a major problem… “Believe it or not, medical experts are now warning that for the first time in the history of this nation, we’re headed for the next generation being on track to have a shorter lifespan than us,” she said at her Healthy Kids Fair on the South Lawn of the White House back in October. What we love about Michelle Obama is that she is not just standing behind a podium with a “Let’s Move” campaign banner, talking to some suits and health “experts” — our First Lady is out there working up a sweat with grade schoolers across the nation. Take a look at some pictures of the FLOTUS pleading her case to the American youth… and having some fun doing it.