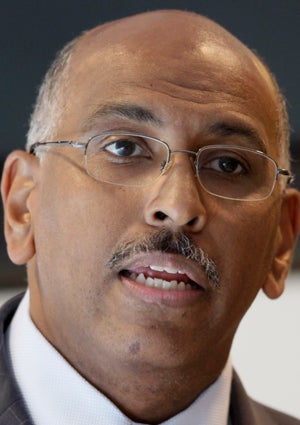 Republican Michael Steele is under scrutiny over offhand Obama criticisms. Last Thursday, speaking at a Connecticut fundraiser, he told a crowd of supporters, “This was a war of Obama’s choosing,” referring to the Afghanistan war. He continued, “This is not something the United States has actively prosecuted or wanted to engage in,” according to the Huffington Post. Steele also accused President Obama of “demonizing Iraq while saying the battle really should be in Afghanistan.” His remarks were praised by republican Ron Paul. However, 2008 presidential candidate John McCain did not approve of Steele’s statement. McCain is now questioning whether Steele should remain a party leader, reports CNN.com. Steele issued a statement through the RNC on Friday afternoon in an attempt to clarify his words: “There is no question that America must win the war on terror,” Steele said. “During the 2008 Presidential campaign, Barack Obama made clear his belief that we should not fight in Iraq, but instead concentrate on Afghanistan. Now, as President, he has indeed shifted his focus to this region. That means this is his strategy. And, for the sake of the security of the free world, our country must give our troops the support necessary to win this war.”