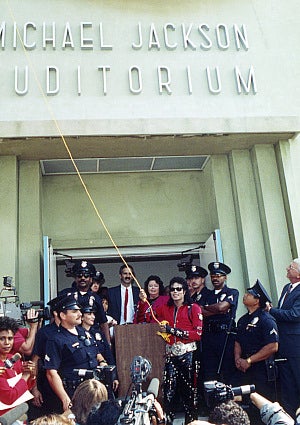 In 1989 Michael Jackson‘s “Beat It” was certified platinum. The king of pop had claimed his crown with his best-selling albums “Off the Wall” (1979) and “Thriller” (1982) and every little kid wanted to moonwalk just like Mike. Imagine the how ecstatic the students at Gardner Street Elementary School in Hollywood, California must have been to have their auditorium named after Michael Jackson (who also attended the ribbon cutting). Fast-forward to 2003. Gardner Street Elementary parents asked school officials to remove Jackson’s name from the building because of the allegations of child molestation against him. MJ’s name has remained covered up ever since. Now, fans are asking that the school return Michael Jackson’s name to its former place. They’ve taken to Facebook to get the word out, arguing that since Jackson was acquitted of criminal charges, there’s no reason why his name should not go back up on the auditorium, LATimes.com reported. Still, speculations about the late pop star continue to circulate even after his death. Given that this was such a hot button issue during the last decade, should the school put Michael Jackson’s name back up on its auditorium? Read More: