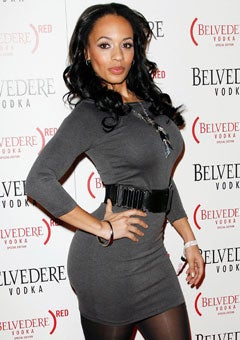 Let’s clear the air about a few things from the rip so we don’t have to address the nefarious accusation that I am a hater: Melyssa Ford is a human roller coaster of womanly parts and windy curves that sway and pop in all the ideal places. She’s a certified brickhouse. Janelle Harris is a stout and stubby editorial geek who gets far too much satisfaction from setting new records at the buffet to pursue the perfect Coke bottle physique. Them cornbread squares ain’t gonna eat themselves.

I wasn’t born to be a Melyssa Ford, ergo I have no reason to hate on her. But I can fire her up for continually contributing to a problem she swears she wants to change.

In a recent piecemeal video posted on gossip haven Bossip, the hip-hop generation’s favorite piece of eye candy rambles on about her interest in helping young women, even going so far as to suggest she’d like to develop a mentorship program to encourage them to do big and mighty things. She’d like to see girls pursue careers in the entertainment industry that aren’t as stereotypical as video modeling, she claims.

But can anything be more stereotypical than a video model waxing poetic about inspiring girls who look up to them while she’s sashaying to and fro in a barely-there outfit and allowing the camera to zero in on her lady lumps?

This isn’t the first time I’ve heard Melyssa express concern about teens and tweens falling for the mirage that is video chick-dom. In fact, she’s been a mouthpiece for organizations — including the Women in Entertainment Empowerment Network — who are working to push young girls toward successful careers that don’t require a push-up bustier and a pair of booty shorts as part of the standard uniform. Just by listening to her speak, I can tell she’s intelligent. That does not automatically guarantee, unfortunately, that she’s got the lionesses’ share of common sense.

When you’re telling them that the lifestyle is not all that it’s cracked up to be, you’ve got to commit fully to it. You can’t tell a 12 or 14-year-old no, no, no and then strap on a bra and panty set for a cover spread in King magazine. You can’t divulge the many evils of the music industry and the woe-is-me experiences of the average gal in the business and then willingly submit yourself to the same traps. And you certainly can’t talk about empowering women in some spandex leggings and an itty bitty sports bra, give some horny cameraman the OK to zoom in on your breasts and butt and expect anything you’ve just said to be taken seriously (or frankly, to be cared about).

Nobody’s assigning the luscious Ms. Ford or any of her shapely contemporaries to a wardrobe of frumpy cowlnecks and saggy Hammer pants to impart their message. In fact, that would work quite to the contrary, since girls tend to relate better to mentors when they admire their ability to both be smart and stylish and attractive. But what’s wrong with doing it in a blazer and a pair of jeans? And what about making the wholehearted commitment to teach, by example, how to be sexy without being vacuum-packed into a skintight get-up? Show girls that you truly value your brains more than your backside by sitting down, conducting an interview that wreaks of sincerity and carrying through on the role model behavior you claim to want demonstrate.

I know Melyssa prides herself in being a businesswoman who gave the industry a one-two punch by calling the shots and wielding control over her famous figure. And if her business is selling her body — so to speak — that’s her prerogative. It’s just disappointing to see someone with the potential to garner a real impact straddling the moral fence like she’s afraid being an ex-video chick just won’t rake in the dough like being the self-proclaimed real-life Jessica Rabbit once did.

I guess on top of her other obvious physical gifts, it seems Melyssa also has a talent for talking out both sides of her mouth.