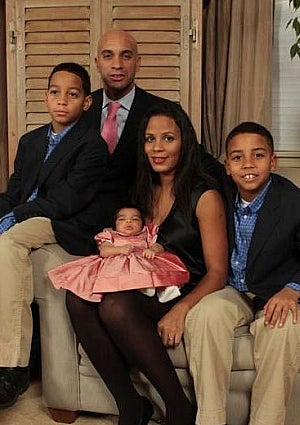 She’s an accomplished attorney and hands-on mother, married to an influential Washington, D.C. political leader. When they first met, she was assigned to serve as his mentor. She’s been noted for her stylish wardrobe, and her name is Michelle.

You may be thinking of Mrs. Obama–but we’re talking about Washington’s other first lady, Michelle Fenty.

The wife of Washington, D.C. mayor Adrian Fenty, who has served in office for nearly three years, Mrs. Fenty was born and raised in London, the daughter of Jamaican immigrants, before moving to New York City with her family at age 18. She says she never envisioned herself as D.C’s first lady when she met her future husband at Howard Law School in 1994.

“Not in my wildest dreams did I ever imagine that he would run for mayor, but I think what most people don’t necessarily understand is that his journey was much more of a natural progression than simply looking at the end result of his being mayor,” she says in her chic British accent, listing her husband’s former positions, including Advisory Neighborhood Commissioner and City Council member. “If you look at our lives, it was literally the next step in a progression, which was good because it gave us time to adjust.”

With three young children–nine-year-old twin sons Matthew and Andrew, and 11-month-old daughter Aerin–Mrs. Fenty certainly seems to have adjusted the challenges of her public capacity to suit her private life. Amid the benefits she attends and hosts, the charitable institutions with which she volunteers, and the speaking engagements she performs, she works as an attorney specializing in global technology.

“I have spent a lot of years studying to be an attorney, and I felt it was important for me to continue to work and contribute,” she says, “Not just to my household, but to my personal fulfillment as well.”

Mrs. Fenty also serves as president of the advisory board for Capital Breast Care Center, which provides free mammograms to underserved, low-income women in the District. “The breast cancer mortality rate in Washington, D.C. is among the highest in the country, and African-American women are twice as likely to die from the disease,” she says, explaining why she got involved with the organization more than two years ago. “Given those two factors, I thought that it was important for me to do whatever I can to let residents know this, and provide mammogram screenings for women in the District.”

Family time, says Fenty, is another part of her hectic life that is absolutely critical, centered mostly on her children’s activities. “My husband and I have had to remain very fluid and flexible with our schedules so we can adapt to not only the challenges from our professional lives, but also to our family,” she says. “I basically approach each day knowing that I may not accomplish all the goals I set out to do in the morning, but I’m okay with that because, at the end of the day, I am trying to achieve so many things.”