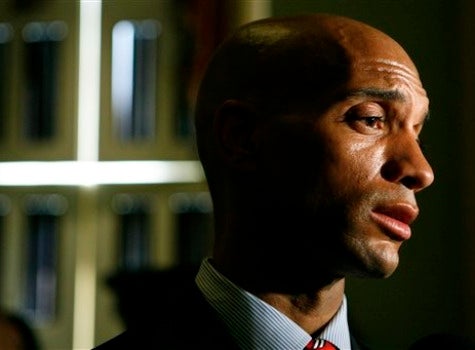 DC’s Mayor Adrian M. Fenty is currently signing the bill to legalize same-sex marriage in the Capitol city today. In a press conference this morning Fenty said it was the right time for this bill to pass, “with the turnover in Congress [and] with our fabulous new President,” and expressed his hope that, “when this bill is signed into law it will not get anything more than the passive approval … that it deserves.”

Mayor Fenty commended the people of DC for fighting to end “marriage inequality.”

“Today an era of struggle ends for thousands of residents of Washington DC, who have been [prohibited from being able] to marry the people of their choosing. …We will no longer endure the weight of marriage inequality not now and not ever,” Mayor Fenty said.

Fenty brought his parents, an interracial couple, to the event and made the point that had interracial unions been illegal, his parents would not have been able to get married.

Visit CNN.com to watch live coverage of the bill signing.