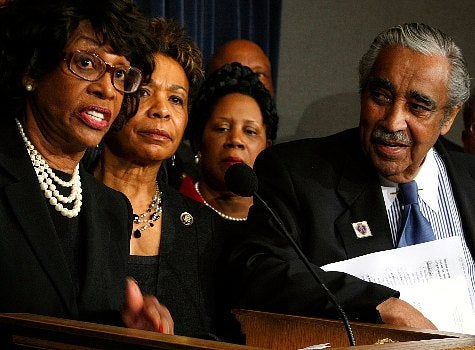 Last week, Harlem Congressman Charles B. Rangel was formally charged on 13 ethics violations by the House Ethics Committee. This week, California Congresswoman Maxine Waters faces ethics charges for allegedly lobbying for Treasury officials to bail out a bank with ties to her husband… Two high-profile Black politicians in Washington facing corruption charges at the same time. Coincidence? The Congressional Black Caucus may have reason to think it isn’t. There’s a “dual standard, one for most members and one for African-Americans,” an anonymous member of the CBC told Politico.com. “This is stacked against you once an accusation is made,” the lawmaker added. “You’re guilty until proven otherwise.” As senior members of the Congressional Black Caucus, Walters and Rangel are influential players in Washington — so it comes as a surprise to some that they would face such charges three months before 2010 mid-term elections. The timing could’t be better, writes political analyst, Earl Ofari Hutchinson. “House Democrats are scared stiff that the GOP will erase their majority. What better way to prove that they can police their own, and make good on Pelosi’s oft quoted vow to cleanse the swamp in Congress than to make sacrificial lambs out of a handful of wayward Democrats.” Most troubling to insiders is the fact that of 30 ethics probes presented to the the recently established Office of the Congressional Ethics, eight are active. All are against Black politicians. The latest allegations against Waters and Rangel bring tensions between Democrats and Black politicians in Washington to the forefront. Hutchinson thinks Waters is being made the “sacrificial lamb” by Democrats. “The choice of Waters and Rangel has little to do with the actual charges and their alleged transgressions, or even whether they have merit or not. It’s politics, pure and simple,” concludes Hutchinson. What do you think? Are members of the CBC being racially profiled?
Loading the player...