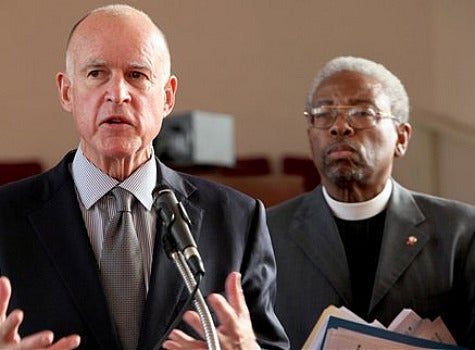 UPDATE 11/21/09: California Atty. Gen. Jerry Brown (above, left), standing with Rev. Clyde W. Oden Jr of the Bryant Temple AME church of Southern California, announced that he will investigate a scam that affected over 30 African-American churches. Four individuals under question are Michael Morris, Willie Perkins, Tonya Wilson, and Wayne Wilson, who have also been suspected of targeting churches in at least 10 other states. The four operated their scam under companies called Urban Interfaith Network and Television Broadcasting Online.


These churches were given computer kiosks which would display advertisements and coupons from local businesses and wouldn’t cost the church a dime. Once the churches signed on to have a kiosk on their premises, these fake companies presented the institutions with lease agreements for as much as $45,000 a year from national leasing companies.

the attorney general is also investigating the leasing companies, who have continued to enforce the terms of these faulty leases, attempting to collect payment, interest and climbing late fees.

10/07/09: Michigan’s Attorney General has issued criminal warrants against two men from Maryland for creating a scheme that tricked 200 African-American churches out of some major money, including 21 churches in Michigan, according to the Detroit Free Press.

The men are accused of defrauding the Michigan churches alone out of $660,000 and even forced the permanent closing of Epiphany Lutheran Church in Detroit. Michael Morris, 29, and Willie Perkins, 54, have been charged with 10 counts of racketeering, conspiracy and fraud

They could get up to 20 years in jail and fines ranging up to $100,000. Morris and Perkins operated under the company names Television Broadcasting Online and Urban Interfaith Network and approached various pastors on the belief that they could lease educational video terminals to the churches for free. But in the end, the ministers were left having to pay back a leasing company an average of $775 a month for the terminals, which turned out to be nothing more than wood cabinets that never worked correctly. The police are currently looking for both Morris and Perkins.
Loading the player...