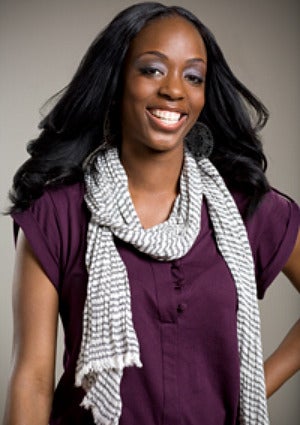 At 19, Marvelyn Brown was at the top of her game. She was a high school basketball star in love with a guy she trusted. One day as she lay in ICU with unrelated pneumonia she was told she was HIV positive. As doctors told her the disease was in her body for just three weeks, the now 25-year-old recalls thinking, “Anybody but me.” Six years after her diagnosis, Brown, a published author, has dedicated her life to HIV and AIDS advocacy. She spoke to ESSENCE.com about her journey from victim to champion and what she wants other young women her age to know about the disease. ESSENCE.com: You were 19 when you found out you were HIV positive and now you’re now 25. Tell us about those first moments after you found out. BROWN: At that moment, really, I wasn’t surprised that I contracted this virus that had no cure, I was more shocked that I got something that I thought I was immune from. I just didn’t think it would ever happen to me. ESSENCE.com: In your mind what kind of people got HIV? BROWN: Everybody but me, or so I thought. I had heard a lot about AIDS in Africa and I knew there was a problem there, and I just thought anybody but me. ESSENCE.com: Did the person you were with know his status? BROWN: I spoke to him not too long ago and he swears he didn’t know and says he’s confused about who gave it to him. But I know for a fact I got it from him. When I found out, it was only living in my body for three weeks and he was the only person I was with and having unprotected sex with. I know where I got it from. ESSENCE.com: What made you go to the doctor? BROWN: I never voluntarily went to the doctor. I was actually sick with pneumonia that wasn’t even related to it. That’s when I found out. ESSENCE.com: At what point did you decide that you’re not going to be a victim but a champion of HIV? BROWN: Honestly, that came a long time after my diagnosis. Initially I put my story out in a local paper because I was like, ‘Oh, people are talking about me. I’m gonna give them something to talk about.’ Looking back I now realize that was a very selfish reason. I didn’t do it because I wanted to help other people but because I wanted to be accepted, somehow. But really coming to terms with who I am and my purpose, that only came about probably two years after my diagnosis. ESSENCE.com: What do you mean people were talking about you? How did people in your community know you were HIV positive? BROWN: I told people I thought were close to me only because I wasn’t aware of the stigma that faced my revelation. ESSENCE.com: How was the reaction once you went to the paper? BROWN: It was mixed. I expected all the negative things, but I just didn’t expect all the positive. That really shocked me because my story related to people who weren’t even going through what I was going through but somehow it struck a chord with them. And then for me to know that I actually had support, that people could actually understand; that was surprising. ESSENCE.com: What made you decide to start doing Public Service Announcements? BROWN: It was just such a whirlwind experience, because from the first time I told my story in the paper I received a national award. It happened so fast and it began to make me think, ‘What did I do differently?’ I was feeling so alone and suddenly I’m getting all this positive national attention. That confused me a bit. It continues to confuse my community because they’re like, ‘She’s HIV positive!’ I think their reaction is because they don’t hear about people who are infected and living positive lives. ESSENCE.com: What do you want other women your age to know about HIV? BROWN: That it can happen to them. That it’s real, and that this is one of those choices you don’t get a second chance at. I thought the worst thing that could happen to me that night was getting pregnant. And in a way I feel like I got my baby and it’s called HIV but 18 years down the line it doesn’t go off to college. I get no vacation from this, all because of that one choice. I’m not gonna call it a mistake because I knew perfectly well what I was doing. I was willing and ready to participate in having unprotected sex. We’re taught about getting second chances in life, but with HIV you get no second chances. ESSENCE.com: You now travel around the country, the world, really to talk about HIV awareness. BROWN: Yes that’s what I have dedicated my life to and I have no plans to stop. I started Marvelous Connections in 2006, a consulting organization so I deal with different media companies about finding innovative ways of incorporating the message into their media. We also deal with the more grassroots initiatives like speaking at high schools and universities. ESSENCE.com: Do people that you meet find it hard to believe that you’re HIV positive? BROWN: Yes, I get that a lot. I think one of the reason’s I’ve been so successful at getting the message out is because I relate to so many people. Then, the idea they had of an HIV-positive person is gone once they meet me. Marvelyn Brown is the author of “Naked Truth: Young, Beautiful and (HIV) Positive.” Find out more about her book and speaking engagements at Marvelynbrown.com For more info on Greater > AIDS, click here. Read More: