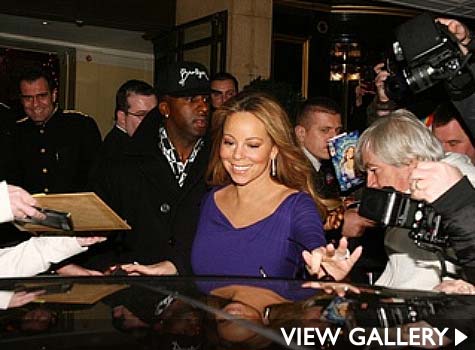 If you’re the girl who’s got everything, what more could you ask for? By reports from a recent taping of UK morning show, GMTV, it would seem superstar Mariah Carey’s answer to that question would be: “There’s always something”. British presenter, Kate Garraway, is dishing about the pop diva’s requirements during a recent taping of the popular TV show.
Garraway said Mimi requested to be lowered on to the GMTV sofa by two people, have an “entourage” of her people (which Garraway said outnumbered the whole GMTV crew) keep an eye out to make sure they got her good side and have somebody walking in front of her backwards, in case she fell down.
According to the Dailymail.com, Garraway was not in the studio when Carey was filming, but apparently got a full report from GMTV staffers who were buzzing about the singer’s appearance. A Mariah rep noted that all mega-stars have a large team behind then and called Garraway’s report a ‘clear, gross exaggeration.’
That might be a tough argument for Carey who requested 20 white kittens and 100 doves on stage when she turned the Christmas lights on at London’s Westfield Shopping Centre.