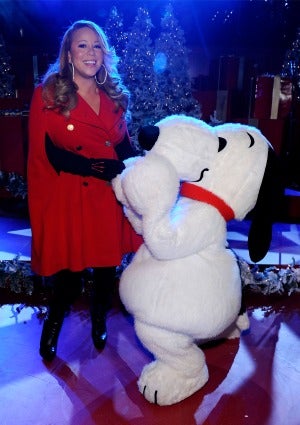 We wouldn’t be surprised if Mariah Carey’s baby inherits the pop and R&B diva’s incredible set of lungs. Of course Carey’s been giving her little one music lessons while still in the womb, confessing that she sings whole albums to her baby bump. In an interview with Radio Disney’s Ernie D, Carey said that she sings the whole “Merry Christmas II You” album to her baby bump. “I just hope that they don’t turn out hating Christmas!” Carey continued. The singer who loves the Holiday season explained that Christmas is going to be a little different this year, since she’s preggers. “I’m trying to figure out how I can do some of the things, but a lot of the things are just out. I’m trying to figure out where we’re going for Christmas, because I usually go to Aspen, but I’m not supposed to go there this year because I can’t ski and I can’t really do any of that stuff being pregnant.” Whatever she and her hubby Nick Cannon decide to do for Christmas, we’re sure it will be joyous and glamorous.
Loading the player...