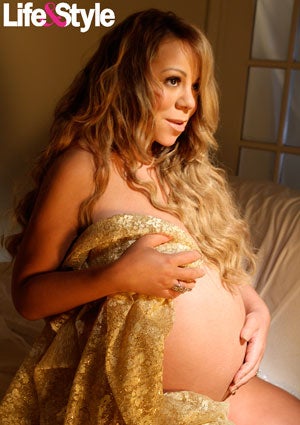 If you’ve seen Mariah Carey lately, you know the pop diva is about to pop! Mariah and hubby Nick Cannon are expecting twins next month. But before she gives birth to “dem babies” as the adorable couple refers to them, Carey spoke with “Life & Style” magazine about her babymoon and posing nude. Check out ESSENCE.com’s exclusive excerpt of her “Life & Style” interview.

Mariah on how she came to take a babymoon: “A friend told me that before she had her son, she took a babymoon, which is something I’d never heard of before. Basically, it’s an excuse to do something decadent before the babies arrive! I’m pretty sure most moms-to-be out there understand what I mean when I say that after a while of being pregnant, you start climbing the walls and just want to get out of the house. So I went to an amazing spa on the ocean with a couple of friends and, of course, Cha Cha and the puppies.”

Mariah reveals intimate details of her fabulous babymoon: “Since at this point I have to really take it easy, we played board games like Taboo and Catch Phrase, ordered spa food and got as many spa treatments as possible!” (The foot massage was the best part.) “They had a method of getting the circulation going in my feet. Which slightly diminished the Sasquatch moment we’re dealing with right now. lol!”

On being thrilled that she’s capturing this moment in her life, nude: “I am so glad we took these pictures as a keepsake and a reminder of this time in my life. Right now I’m counting down the days ’til we meet the babies.”

Finally, Mariah’s hairstylist, Randi Peterson, revealed how this wasn’t a typical photoshoot for the diva: “[It] wasn’t your typical high-glam shoot. Mariah was able to stand up only for intervals of about 2 to 4 minutes per shot, when normally she’d be on her feet all night. I know she wanted to document this for her babies and fans, but they should know it wasn’t easy.”