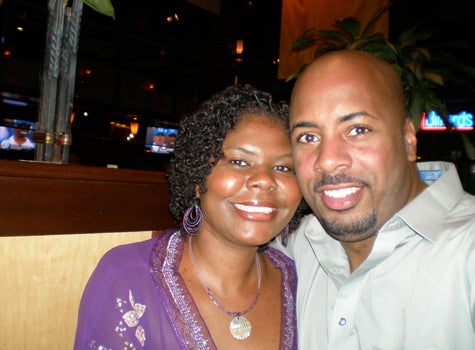 I think there’s some unspoken law that you always enjoy a boon just a tad bit more when it’s received when you least expect it. My big win was one of the heart, yup L-O-V-E. How did I know my man was the one? It’s simple. We survived the biggest trial many relationships try — and often fail — to withstand: long distance love. I met Marty in September 2006 at a Black MBA Conference in Atlanta. I was accompanying a friend to a social and I really just wanted to hang out. I was midway through my doctoral program and I was ready to just be, you know, like emotionally still, spiritually full and physically free. No ties. No stress. Just be. After a night filled with blowing off the advances of stray dudes I was approached, re-approached, and then approached again by Marty. His persistence was not just impressive, it was downright flattering — I guess the fact that he was tall, dark and handsome with an MBA didn’t hurt either. The night ended with me feeding him bacon at 4am at a Waffle House in front of all of our friends! Despite the instant connection, our love affair was more snowball than fireball. Over the next few months we gradually went from dating to monogamy. I appreciated having a man who could compliment me and was my complement. He was business and computer savvy, fun to be around and always had my back. The latter was confirmed by the best test of all: trial by fire. When it was time for me to graduate from my doctoral program I had two major options, one in our hometown, Atlanta, and the other in Baltimore. Unfortunately, the job in Georgia lost its funding and I had to take the two-year position in Maryland. I didn’t know what to expect from Marty. Would we break up or have the ever-so-complicated “open relationship”? Surprisingly, neither option was placed on the table, just working it out. And that’s what we did. Marty decided to move into my home in Athens, Georgia so he could focus on building his business and I wouldn’t have the hassle of managing a renter long distance. All seemed perfect until the day I actually moved; as he unloaded my U-Haul truck at my new home in Baltimore I kept feeling like I left something in Georgia. I realized it was my heart. It was his and being without him would be unbearable. He stayed an extra week and during that time we decided that we’d see each at least every month, and every two weeks when our schedules permitted. Over the next two years Marty and I stayed devoted to our relationship. We planned our trips the month before to get good deals and saw each other every two to three weeks. We compromised, strategized and worked together. Did I mention we talked incessantly? We met in different cities, even countries, and had a blast. I guess what I’m trying to say is…it worked. I’ve finished my post-doctoral appointment and have accepted a job in Atlanta — I move back home in three weeks. This hurdle helped our love in so many ways. First, I truly believe we were meant to be together. I know distance is trying, but if it’s for a finite period of time it can be done — when it’s worth it. Secondly, I learned that I had to be alright with being alone sometimes. I filled my nights sans Marty things that fulfilled me, such as belly dancing, roller blading and yoga. Now I know how to spend time by myself. Last, I learned how to cultivate a relationship without using sex to bond. Thanks to the joys of G-Chat, free long distance calling plans and instant messaging I stayed connected with Marty and got  a deeper understanding of his moods, needs and wants — because all we did was talk. Am I a fan of long distance romance? Nope. But I couldn’t bear to lose my love because I had a new zip code. Luckily, he felt the same way.