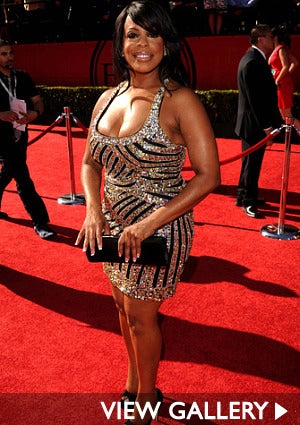 “The ESPYs are where sports and entertainment meet, much like a Kardashian bedroom,” said host Seth Meyers of “Saturday Night Live” in his hilarious opening dialogue at Nokia Theatre. Last night in L.A., ESPN aired its 17th annual ESPY award show celebrating the athletes and their accomplishments in sports. The ESPY awards allow sports fans worldwide to join in an online vote for their favorites in such categories as Best Male Athlete, Best Female Athlete, Best Coach/Manager and Team of the Year. Throughout the night, musical selections were exclusively provided by the eclectic Janelle Monae. The irreverent award show brought out a myriad of A-list athletes and celebrities, as well as those of less notoriety but still hugely respected in their respective games. In attendance was Terrell Owens, Niecy Nash, Lisa Leslie, New Knicks’ Amar’e Stoudemire, Arsenio Hall, Amber Rose, Lakers’ Derek Fisher, actress Tichina Arnold, basketball legend Julius Erving, and even Bobbi Brown came out of hiding. The usually funny Tracy Morgan fell flat as a presenter, but Samuel L. Jackson and Chris Bosh both did well in presenting their awards. The most notable awards went to the NFL’s New Orleans Saints, who went marching in to win the trophy for best sports team with team member Reggie Bush front and center. While quarterback Drew Brees was named Best Male Athlete, Olympic skier Lindsey Vonn showed girl power, taking home awards for Best Female Athlete and Best Female Olympian for fighting off a leg injury to win the gold medal. Of course, the night wouldn’t have been complete unless the biggest thing to hit sports headlines in the last few weeks wasn’t discussed. So LeBron James and his “decision” to go to play in Miami became the two-hour long brunt of almost every joke. With the majority of jokes and skits dedicated to showing how overdone the LeBron announcement was in the media, the laughter that ensued proved that many agreed that the hoopla was a bit much. The night ended on a positive note as the ESPYs donated a large portion of proceeds to The V Foundation, named for its founder, Jim Valvano, which funds cancer research.