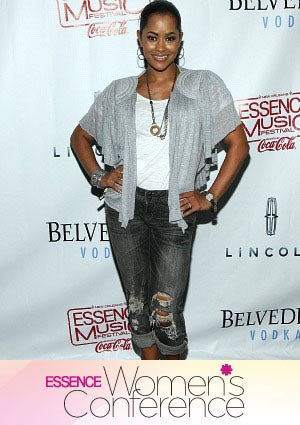 Lisa Wu Hartwell wears many hats. She’s a dancer, actress, TV personality and more. “If it don’t make me money, I don’t do it!” is her famous tagline. She will be joining several powerful women in next week’s ESSENCE Women’s Conference in NYC on November 4th. Lisa is sharing some helpful financial tips to keep your pockets lined with cash. Check out her advice for getting your career started, how to manage your money, and her thoughts on the “Real Housewives of Atlanta…” ESSENCE.com: You’ll be participating in the ESSENCE women’s conference. What are you planning to share? LISA WU HARTWELL: I always talk about women’s empowerment, self esteem and confidence. I talk a lot entrepreneurship. I’ve been involved in a lot different aspects of business and I’ve overcome a lot of different obstacles in my life. I think that knowledge is priceless. Sometimes people aren’t willing to share things they’ve been through but I believe if I can share that with people, maybe they won’t make the same mistakes I made. ESSENCE.com: You mentioned some obstacles. What kinds of financial mistakes have you made? WU HARTWELL: I did a play years ago, it was called a “Change is Going to Come.” Tyler Perry directed that play, about 13 years ago. I hired some producers at that time, because I was a screen playwright and I had no knowledge of producing a play. So I entrusted certain people to do certain things. Sometimes people spend your money and they just go through money in a situation where it can be fixed another way. So sometimes you have to be more hands-on. The second time I went out, I produced it and I had better results. I don’t care what kind of money you have, you just can’t throw money at a situation and tell people ‘handle that,’ I think you need to have knowledge in anything you’re trying to do and you need to trust the people who’re trying to get the thing done. All in all, just have all the necessary tools you need to achieve. ESSENCE.com: For the women who won’t be able to attend this year’s conference, what kinds of money saving tips do you have for them? WU HARTWELL: Pay yourself! You have to pay yourself. Of course, when you’re working for yourself, you’re working more hours. Some people are excited and I’d say, “Guess what baby? You’re going to be working more hours and you’ll probably barely sleep.” But I mean, who else is better to work hard for but yourself? Reality is, pay yourself as if you were on a job and file some away in savings. Some purchases you can’t make right now, get in the mindset of being an entrepeneur instead of a consumer. ESSENCE.com: Do you invest? WU HARTWELL: This economy is crazy. I’m a real estate broker and I’ve invested in a lot of land and I have a lot friends who’ve lost millions of dollars in real estate, also in stocks. but I invest in myself, I invest in our aspirations. We did the book, “When the Cake is Already Made,” with our co-author Miasha Coleman and we’re bringing it to the big screen and we’re excited about that. So the investments I make are in my own future. If you’re going to bank on anybody, bank on yourself. ESSENCE.com: Do you miss being on the “Real Housewives”? What do you think of it now? WU HARTWELL: Actually I don’t. It was fun while it lasted. I have other things going on. I’m shooting a movie and Tyrese Gibson is in it. So I’m very thankful I have other things going on. It’s not that I don’t watch it because I’m not on it, I just don’t have the time to watch it. I do TiVo it, so I will have to catch up. But I do hear other people talking. You have your mixed opinion. When I have a moment I’ll probably watch the whole season in one or two days. ESSENCE.com: What is one single piece of advice you can pass on to people trying to get their careers off the ground? WU HARTWELL: Network! You can go to college and get all the knowledge you want, but if you don’t know the people…who you know gets you through the door, what you know keeps you there. It’s all about forming relationships and it’s about being able to back up whatever you say you can do. You have to have the knowledge and you have to have the people. It’s about rubbing elbows with certain people. Believe me, relationships can go a long way. I don’t believe in burning bridges, you never know.